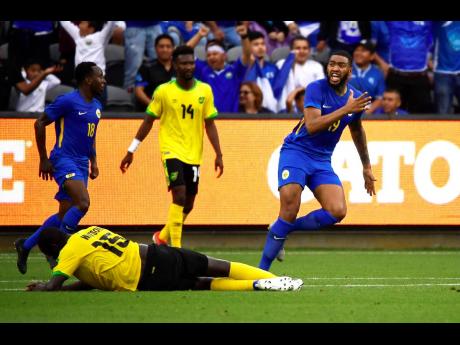 Mark J. Terrill
Curaçao forward Jafar Arias (right) celebrates a goal by Jurien Gaari as Jamaica midfielder Je-Vaughn Watson lies on the ground during the second half of a Concacaf Gold Cup match on Tuesday in Los Angeles. The game ended 1-1.

Football analyst Clyde Jureidini and coach Andrew Price believe that the Reggae Boyz have to improve on their performance in the first round of the Concacaf Gold Cup if they are to, at least, match their achievement at the last tournament where they made the final.

Jamaica topped Group C of the preliminary round with five points after drawing 1-1 with Curaçao, one of their two draws, which followed their opening-day win, and Jureidini and Price both believe the team can do better in possession and be more clinical in front of goal.

The two also thought that the team should have won more comfortably with the chances they created, and that the team could have managed the game a lot better if they had been able to hold possession for longer periods.

“Overall, we were lucky not to concede late, but we should have put away that game from the first half or early in the second half. We should have been three or four goals up on this team. But the luck ran with us, and it ran with us that we were able to win the group based on the next game. But we clearly don’t have our thing work out yet, and coach (Theodore) Whitmore wasn’t happy with how we made hard work of a game we should have won easy,” Jureidini said.

However, he thought that the key element in the team ending with a draw against Curaçao was wastefulness in front of goal and an inability to keep possession of the ball over long periods.

“The result never really reflected the amount of goalscoring opportunities we created against them. But we kept giving them confidence to come forward, and they finally got a goal. If we were more clinical and confident, the results would be better. But we are not executing and managing the game as well as we ought to,” he added.

“At the end of the day, we achieved our first goal, which is advancing to the next round. We have also won the group. But the team is doing just enough to get through, and that is how you deal with tournaments,” Price stated

“But the team hasn’t played their best game. We have a talented bunch of players, it’s just to lighten up and be more clinical in front of goal. Also, we have to try and improve ball retention and increase possession. If there is anywhere I believe we should improve right now, it is our ball possession. But I am sure the coaching staff will work on that.”

Although Whitmore received a lot of criticism for making five changes from the El Salvador game, Price said his decision was justified.

“This was the game to rest players. We had put ourselves in a position that without any strange happenings, we would have qualified, whether we won or drew and we did not lose.

We put a team out with a number of changes and he gets to look at the players he is going to call on for the quarterfinals.

If you don’t play them you won’t know if they are ready, so it was a justifiable opportunity for him to get those players out there to see if they are ready for the task of the quarterfinal. It was a game to give people in our squad of 23 some playing time to see what they are made of and if they can help the team in the next round,” Price said.