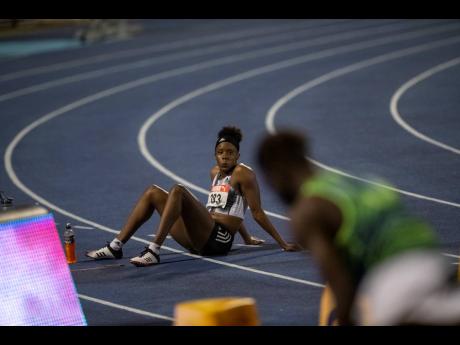 Gladstone Taylor
Danielle Williams sits on the track moments after she was adjudged to have false started in the controversial 100m hurdles final at the Supreme Ventures Limited/JAAA National Senior Championships at the National Stadium on Sunday.

The National Senior Championships started with worries that a bad date had been chosen, one too far away from the September 28 – October 9 World Championships in Doha. The competitors at the Nationals pushed those concerns aside for a while with the quality of their performances. Then disaster struck.

The starter called the field in the second-to-last race of the meet – the 100-metre hurdles final– up to the set position. Before he could fire his pistol, a loud sound punched the air. Later, one fan said there was a child in the vicinity of the start bursting a noisemaker distributed to patrons by a sponsor. The gunshot-like sound was heard by grandstand fans as far away as the finish line.

2015 World champion Danielle Williams reacted first, set off by the sound which could have been seen to affect the provision of a fair start for each of the ladies in the race. Instead of a green card to give the all clear, she was disqualified for committing a false start.

The starter wears headgear to protect his ears from the sound of the pistol and that may have muted the intrusive noisemaker blast for him, but it seems improbable that no one in his team of assistants heard the disturbance. Had a submission been made, surely the athlete would have received the benefit of a doubt, which is a guideline that often attends decision-making in sport.

There are three key constituents affected by rules in sport, the player, the official and the fan but the third group is often ignored. The rule must be just and easy to understand and administer but if it can too easily destroy the spectacle of the contest for the fan, it can become an obstacle.

On Sunday, when the 100-metre hurdles final was contested, fans looked forward to the meeting between Williams and new Jamaica record holder Janeek Brown.

Had Williams false-started without the interference of the intrusive sound, there would be no recourse. As things stand, the fans were denied the joy of a worthy contest.

In the end, the race was aborted. Given that Williams was disqualified, the selectors may feel that she cannot be included when they sit to select the 100 metre hurdles team that will represent Jamaica at the Worlds. That would be a disaster. She clocked 12.48 and 12.49 seconds last year before beating many top rivals at the Doha Diamond League meet in May. Hopefully, they will start their deliberations with a clean slate.

If not, her only route back to Doha, host city of the World Championships, is to win the Diamond League. At the root of the discomfort is the zero-tolerance, false-start rule itself. In a time past, each runner had a false start to burn before subsequent wrong moves earned disqualification. Later, the first false start was charged to the entire field, with disqualifications to follow. The current rule has evolved since it was introduced in 2010. Now there is a ‘no-twitch’ provision.

If you shake in the blocks, you can be forgiven once your hands don’t leave the ground and once your feet don’t leave the block pads. There is, nevertheless, something fundamentally wrong with a rule which levies the maximum punishment for an innocuous first time offence. It increases the potential effect of human error and hurts every constituent of the sport, official, athlete and fan alike. To keep it on the books in its current form is to court disaster.