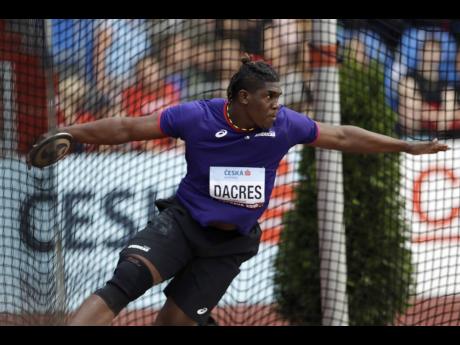 Fedrick Dacres is now regarded as a pioneer for Jamaica in the men’s discus throw and the stocky athlete has been steadily showing progress over seasons past. Now having established himself as one of the world’s top throwers, Dacres believes that he has only begun to break the threshold of his potential.

It was June 16 during the IAAF Diamond League at Morocco’s capital, Rabat, which would set the stage for the athlete’s best throw to date, where he launched an impressive world-leading 70.78m effort that saw him breaking the Diamond League record while shattering Jamaica’s national record along the way.

This was the second time that Dacres had achieved this feat after he had done the same just last year in Stockholm, Sweden, when he had posted a then Diamond League and national record mark of 69.67m.

Dacres, while proud of the achievement, is not overly concerned about the feat. With the IAAF World Championship coming up in Doha, Qatar, this September, he will not allow the records to blind him from the competition he will have to face. He believes that while it was good to throw a world-leading mark at this time during the season, it means nothing if he is unable to perform well when it truly matters.

“Truly, it means nothing,” Dacres said. “It just means that we got a good throw. It’s really nice to see but we’re working more on getting the consistent throws. As for my expectations, I just wanted to be consistently over 70m. We’re training hard and trying to be consistent because the big day is coming up.”

On Saturday at the JAAA/Supreme Ventures National Senior Athletics Championships, Dacres had to play second fiddle to his compatriot Traves Smikle when his best effort of 63.49m was bested by Smikle’s 64.50m. Disappointed with his distance more so than his placement, Dacres echoed the sentiment that his less-than-stellar outing was a consequence of a poor discus ring.

“The circle is like glass. It’s really slippery and there is no friction. We can’t get a good grip in the circle so we’re not able to work the circle as well as we could,” he explained.

Yet despite the loss, Dacres praised his training partner on winning at the National Trials, with this win being Smikle’s third overall national title.

“He’s a great thrower. I don’t think we’ve seen Traves’ true potential as yet, but it shows that he can throw very well,” Dacres said. “It takes time, as I told him [Smikle]. So we’re actually just working towards getting that mark that gives a good account of ourselves.”

With more events lined up for him in the months leading up to the World Championships, Dacres hopes that he will only improve going forward.