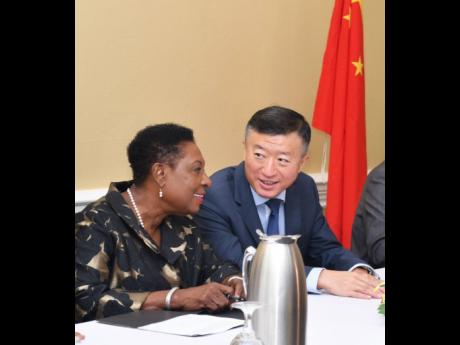 Contributed
Sport minister Olivia Grange (left) shares a light moment with the Ambassador of the People’s Republic of China to Jamaica, Tian Qi. They were at the official send-off, on Tuesday, for the second batch of 138 Jamaican athletes and coaches who will receive specialised training in China under a sports cooperation agreement between both countries.

Sport minister Olivia Grange says she has seen what she describes as major improvements in the performance of local sports people who have participated in first year of the sports cooperation agreement with the People’s Republic of China.

Grange signed the agreement last year, under which more than 400 Jamaican sportspersons in seven disciplines will receive ­specialised training in China over three years.

The first batch of 138 athletes and coaches completed a 60-day training programme in September 2018.

Referring to early signs of the success of the project, Grange said:“Five of the [women’s] footballers trained have matriculated to the Under-20 national programme. Thalia Richardson, from badminton, has advanced to become the national female champion. It has also been shown that the times and techniques of the swimmers have improved since the training they have received through the project. We have seen that the gymnasts have shown great improvement performing in regional competitions.

Minister Grange was speaking at the official send-off for the second batch of 138 athletes and coaches who will begin travelling ­tomorrow to specialised training facilities across China. She urged the ­athletes and coaches to make the most of this training opportunity.

Grange thanked the Government of the People’s Republic of China for providing training and ­equipment under the agreement. She said that on the recommendation of the Chinese coaches, the Ministry Sport has acquired the services of a personal trainer to do strength training work among the athletes. The Ministry is also facilitating the use of a gym at no cost to the athletes or their national federations.

The official send-off for the athletes was attended by the Ambassador of the People’s Republic of China to Jamaica, Tian Qi.

Grange especially acknowledged the efforts of Ambassador Qi, the Chinese Embassy and the China Sport International Company (the state-owned sports cooperation agency) for facilitating the project.