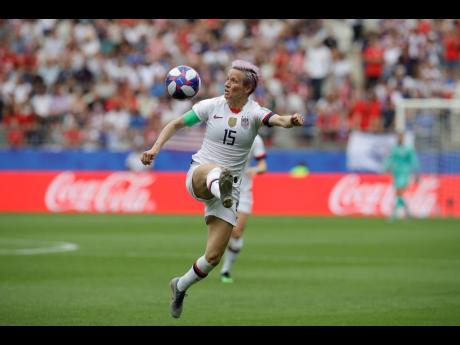 Megan Rapinoe said yesterday that she stands by previous comments that she would not visit the White House if the United States wins the FIFA Women’s World Cup.

“I stand by the comments that I made about not wanting to go to the White House, with the exception of the expletive,” she said. “My mom would be very upset about that.”

Rapinoe spoke at a previously scheduled news conference a day after President Donald Trump called out the US women’s national team star on Twitter. Trump referenced a video that surfaced on Twitter in recent days, posting: “Megan should never disrespect our Country, the White House, or our Flag, especially since so much has been done for her & the team.”

Trump said he would invite the US team “win or lose.”

Earlier in the week, Trump had also told The Hill that it wasn’t appropriate for Rapinoe to protest during the national anthem.

Rapinoe’s initial comments were made during an interview for a magazine in January in which she was asked if she was excited about the prospect of going to the White House. In a video excerpt of the interview posted Tuesday, she can be seen using a profanity when she says she’s not going. She also expressed doubts the team would be invited.

US coach Jill Ellis said she didn’t feel the controversy over the comments would be a distraction for the team, which is preparing for today’s quarter-final match against France.

“I think this team has a remarkable focus. We all support Megan. She knows that. We know we have each other’s backs in there,” Ellis said. “I think for our players, there’s only one purpose, one mission, why we’re here. Comments, media, whatever, it has always been something I think we can block out pretty easily.”

Rapinoe also said she didn’t believe the comments would be divisive on the team.

“We’re very open with each other, obviously everyone knows who I am. I didn’t make the comments at a press conference here. They were made months ago, just kind of resurfacing,” she said. “I think, if anything, it just fires everybody up a little bit more.”