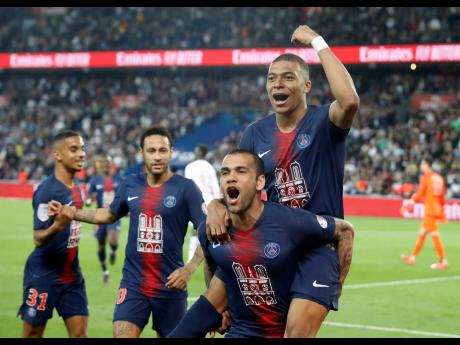 AP
PSG’s Kylian Mbappe, top, celebrates with teammate Dani Alves after scoring the third goal during the French League One football match between Paris-Saint-Germain and Monaco at the Parc des Princes stadium in Paris on April 21.

French champion Paris Saint-Germain have signed a contract extension with supplier Nike until 2032.

No financial details were given but the deal is reportedly worth 80 million euros ($91 million) per year.

PSG, valued at 914 million euros ($1.04 billion), say the deal helps “further build the brand’s success globally” and includes the men and women’s football teams as well as the handball team.

PSG have worked with Nike since 1989.

PSG president Nasser Al-Khelaifi says the agreement “reflects what the club has become on the global stage and the great ambitions we have.”

PSG have been owned by Qatari investors QSI since June 2011, but have failed to get past the quarter-finals of the Champions League despite massive investment.