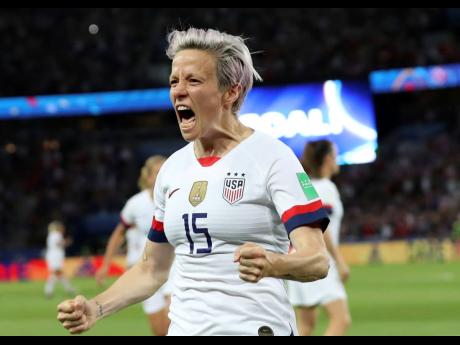 Rapinoe turned turmoil into triumph yesterday, scoring twice in the much-anticipated clash with host France to send the defending champion United States into the semi-finals of the FIFA Women’s World Cup with a 2-1 victory.

Two days earlier, Rapinoe had been called out on social media by President Donald Trump after video surfaced of her saying she wouldn’t visit the White House if the United States won the tournament, and the critics pounced. Rapinoe shrugged them off by facing the crowd with her arms raised in celebration after both her goals.

“I don’t really get energised by haters, or all that. I feel there are so many more people that love me,” she said with a laugh. “I’m more energised by that.”

Now the top-ranked Americans are headed to Lyon to face No. 3 England in a semi-final match on Tuesday.

France had been vying to become the first nation to simultaneously hold the men’s and women’s World Cup trophies but fell well short as their aggressive play, home-field advantage, and flag-waving crowd that belted out La Marseillaise failed to faze the ever-confident US team.

Rapinoe, her hair highlighted with a pastel pink, scored on a free kick in the fifth minute that bounced between French players and past goalkeeper Sarah Bouhaddi. She did it again in the 65th minute after blasting a cross from Tobin Heath that Bouhaddi dove for but couldn’t stop. It was her fifth goal of the tournament.

Fourth-ranked France pulled back on Wendie Renard’s header off Gaetane Thiney’s free kick in the 81st. It was the 6-foot-2 defender’s fourth World Cup goal and gave the home crowd at the sell-out Parc des Princes hope.

“I mean, you have to give it up to the French team. I think they outplayed us for sure with the ball, but we were so good defensively, so strong. We hit them where it hurt. We took our chances,” Rapinoe said. “This team – unreal, unreal amount of heart.”