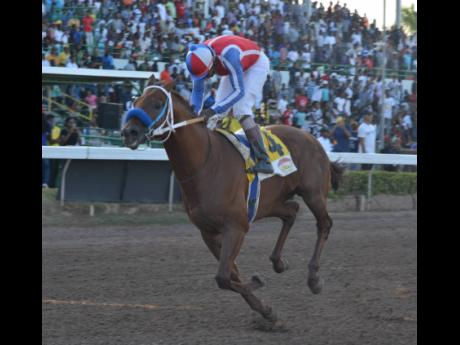 Kenyon Hemans
SUPREME SOUL, with Shane Ellis aboard, gallops to a win in the Jamaica Derby at Caymanas Park yesterday.

SUPREME SOUL yesterday stayed on course to complete the Triple Crown, using his class and superior staying power to overhaul SENTIENT inside the last half-furlong to win the 12-furlong Jamaica Derby by two lengths at Caymanas Park.

A howling 1-5 favourite, SUPREME SOUL, the 2000 Guineas and Governor’s Cup winner, galloped to the lead with Shane Ellis and led the nine-horse field past the stands with stablemate PRINCESS AVA chasing.

SENTIENT, the Governor’s Cup runner-up, attacked SUPREME SOUL five furlongs out in a bid to steal the race after being caught close to home in last month’s Governor’s Cup at 10 furlongs.

However, SUPREME SOUL, who had allowed SENTIENT 16lb in the Governor’s Cup, now sitting level at 126lb, was roused by Ellis and responded by again wearing down his rival to land his seventh win from eight starts, his only blemish being a loss in December’s Jamaica Two-Year-Old to RUN THATCHER RUN.

SUPREME SOUL handed Nunes and Ellis five derby winners apiece and their third as a team following third-past-the-post ORPHEUS being awarded the 2016 race in the stewards’ room after a double disqualification of FUTURE KING and BIGDADDYKOOL.

Nunes bagged $5 million in stakes from the derby with TRICKY ONE finishing third, pushing his season earnings to more than $40 million, approximately $17 million clear of 18-time reigning champion, Wayne DaCosta, whose reign he is firmly on target to end.

ENGLAND ROSE made all from post-position one at three furlongs straight, handing female apprentice Abigail Able her first career win.

Racing continues at Caymanas Park this afternoon with BIGDADDYKOOL hoping to topple topweight WILL IN CHARGE in the nine-furlong Viceroy Trophy.