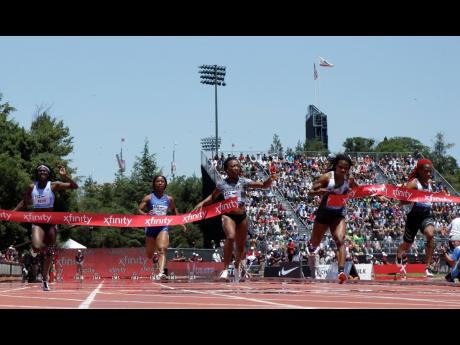 On a day when fans were treated to nine world-leading performances at the seventh leg of the IAAF Diamond League, Elaine Thompson and Danniel Thomas-Dodd were the top Jamaicans at the Prefontaine Classic, held on the campus of Stanford University in California. Thompson was surprised by Nigerian Blessing Okagbare in the 200m, while Thomas-Dodd was second in the shot put.

A week after she set the fastest time in the world in Kingston at 22.00 seconds, Thompson came into the straight chasing Okagbare, the 2013 World bronze medallist. The leggy Nigerian used the gentle curve in the outside lane to clock 22.05, with Olympic gold medallist Thompson back at 22.21 seconds. Further back were British European champion Dina Asher-Smith and two-time World champion Dafne Schippers of Holland in third and sixth, respectively.

Thomas-Dodd, the Commonwealth champion, shot to a first-round lead with a throw taped at 19.26m, but World champion Gong Lijiao of China took over in round two with a put measured at 19.46m and sealed the deal with a bigger one measured at 19.79m.

World and Olympic champion Omar McLeod lead the 110m hurdles field almost all the way but faltered at the end. Olympic runner-up Orlando Ortega of Spain and Wilhem Belocian of France, the former World Under-20 champion, edged past with times of 13.24 and 13.29 seconds, respectively. McLeod and national champion Ronald Levy followed in 13.29 and 13.30 seconds, respectively.

A week earlier, Shelly-Ann Fraser-Pryce posted times of 10.73 and 22.22 seconds at the JAAA/Supreme Ventures National Athletics Championships. Looking weary from her first big meet double since the 2013 World Championships, the 33-year-old was eighth in the 100m, clocking 11.39 seconds. Marie-Josée Ta lou, the compact Ivorian who placed second in the 2017 World Championships in both the 100 and 200m, won in 11.02 seconds.

Commonwealth bronze medallist Natoya Goule dipped under two minutes for the second 800m race in a row with a sixth-place time of 1:59.82 minutes. The winner was Caster Semenya of South Africa, who covered the two-lap distance in 1:55.70 seconds.

In the men’s 100m, American Christian Coleman lowered his world-leading time from 9.85 to 9.81 seconds, with 2004 Olympic champion Justin Gatlin and Jamaica-trained European champion Zharnel Hughes of Great Britain second and third in 9.87 and 9.97 seconds, respectively.

American Rai Benjamin made the 400m hurdles a one-man show with his world-leading run of 47.16 seconds. Similarly, Russian Mariya Lasitskene, the dominant high jumper of the last few seasons, upped her world lead to 2.04m, and world steeple chase record holder Beatrice Chepkoech of Kenya sped to a time of 8:55.58 minutes.