No fault but your own! - Clive Lloyd holds Windies solely responsible for poor results 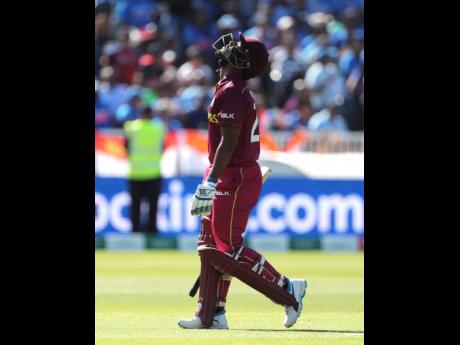 Aijaz Rahi
Windies batsman Nicholas Pooran looks to the sky in disappointment as he leaves the field after being dismissed by India’s Kuldeep Yadav during their ICC World Cup match at Old Trafford in Manchester, England, on Thursday.

Legendary former Windies captain Clive Lloyd has insisted that the team is solely responsible for its poor performance in the ongoing ICC World Cup.

The Windies have recorded just one victory in their seven matches played, with only games against Afghanistan and Sri Lanka remaining.

Lloyd, who had predicted that the regional side would go all the way, said that in too many matches the Windies were in full control, only to let the advantage slip out of their grasps.

“West Indies’ chances of making the semi-finals are now over – and that really has to be called a disappointment, particularly considering what a good start they made to their campaign.

“They won well against Pakistan, and then when they had Australia at 79-5 in their second game, I really thought they might be able to do something special this year. But in the end, that Pakistan game has been their only victory, and they only have themselves to blame,” Lloyd, the last man to lead the regional side to World Cup glory, said.

And while he lauded the fielding and said the bowling was impressive at times, he was particularly harsh on the Windies’ batsmen, who he said simply did not apply themselves.

He charged that the batsmen gave their wickets away needlessly.

“Too many times the batsmen have got themselves out when all it needed was a bit more application. They have lacked the experience needed to bat their opponents out of a game,” Lloyd said.

“The odd batsman has received one with their name on, but really very few balls have really deviated and caught somebody unaware.

“They have some terrific young players in this side; guys like Nicholas Pooran, Shai Hope and Shimron Hetmyer have shown in flashes that they are a match for anyone in the world. But no one has really made a big score,” he argued.