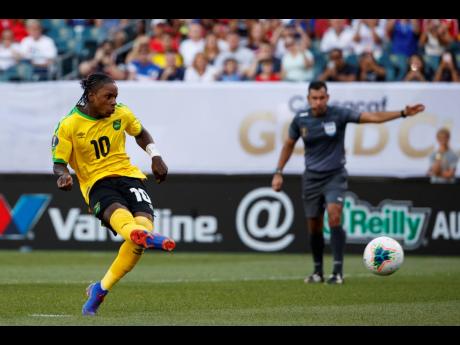 AP
Jamaica’s Darren Mattocks scores his penalty kick to give the Reggae Boyz a 1-0 win over Panama during the second half of their Concacaf Gold Cup match at the Lincoln Financial Field in Philadelphia, Pennsylvania, yesterday.

Jamaica advanced to their third straight Concacaf Gold Cup semi-final after scoring a 1-0 win over Panama at the Lincoln Financial Field in Philadelphia, Pennsylvania, yesterday. The Reggae Boyz’s goal came from a Darren Mattocks penalty in the 75th minute.

Mattocks, who has played just one of Jamaica’s four games in the tournament, came off the bench in the 73rd minute, and it was his header that came off the hand of a defender to earn the penalty. The former Waterhouse striker tucked away the kick to send Theodore ‘Tappa‘ Whitmore into his second successive semi-final.

After a cagey start to the affair, Panama looked to build their game through possession, while Jamaica sat back and defended and looked to hit their opponents on the break.

Panama nearly broke through in the 21st minute, but goalkeeper Andre Blake was quick off his line to stop Edgar Barcenas, who had skipped through the Jamaican defence. Panama created another chance in the 25th minute when they caught the Jamaicans on the break, but Abdiel Arroya could not apply the finishing touch, with only Blake to beat. Two minutes later, Barcenas had another great opening, but Blake was again quick off his line to deny the midfielder.

As the Jamaicans struggled to keep their opponents at bay, Alberto Quintero had a shot deflect just wide of the target.

Jamaica’s best chance of the half came three minutes from the end when the Panama defence turned over the ball on top of the area, but Dever Orgill’s shot was saved by Luis Mejia in goal. Two minutes later, Shamar Nicholson came close with an overhead kick after a quick free kick.

Jamaica started the second half on better footing, and Junior Flemmings fired a shot just wide from 18 yards. The Reggae Boyz then took the lead in the 75th minute when they were awarded a penalty after Mattocks’ header hit the hand of a defender. The forward, who had just come on a substitute, demanded the spot kick after an argument with his teammates and put it away with equal confidence to put the Reggae Boyz in front. Flemmings had another great chance to extend the Jamaicans’ lead, but he could not make contact on a cross from three yards out. Jamaica will be without their top defender, Damion Lowe, who will miss the semi-final because of card accumulation.

The last quarter-final game was being contested by the United States and Curaçao, who drew 1-1 with Jamaica earlier in the competition, at press time. The winners of that match meet Jamaica in Nashville, Tennessee, on Wednesday.