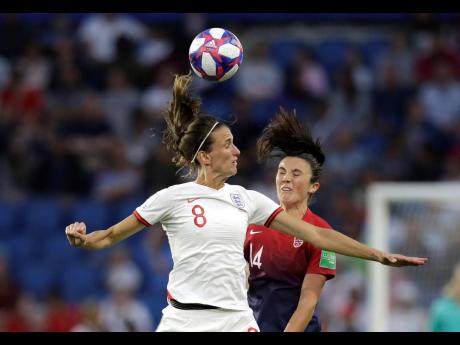 England coach Phil Neville says the United States (US) have a ruthless streak.

It’s one of the reasons the US have never missed the semi-finals at the FIFA Women’s World Cup and why the team has three overall titles, more than any other nation.

“America has got that ruthless streak of wanting to win,” Neville said. “You saw the last five minutes of the[quarter-final] game against France. The game management was fantastic. They took the ball into the corner, they knew what it took to win, and they celebrated like winners. That’s what I admire, and that’s what my team has now. It’s about winning.”

The third-ranked Lionesses play the defending champions today in Lyon. The winners will go on to the championship match, facing the winners of the other semi-final tomorrow between Sweden and the Netherlands. Jamaicans Stephanie Dale Yee Sing and Princess Brown will be the assistant referees in that game.

England have never broken through to the final at the World Cup. The Lionesses fell to Japan four years ago in the semis in Canada before going on to defeat Germany in the third-place match for the team’s best tournament finish.

“My players now want to win,” he said. “If we don’t get the right result, we’ll feel the disappointment, and we’ll see that as a failure. That’s not me being negative, that’s just our expectations and our belief and our confidence and our mindset.”

There were questions when Neville was appointed to lead the team early in 2018 because he had never coached a women’s team. But the former Manchester United and Everton star has answered all the critics by building a team that believes it can win.

“I think we’ve shown throughout this tournament that we can go toe to toe with anybody,” captain Steph Houghton said.

The Lionesses head into the US game with four straight clean sheets in France, including a 3-0 quarter-final victory over Norway. Jill Scott, Ellen White and Lucy Bronze each scored, with Bronze’s goal sealing it.

White, as well as Alex Morgan and Megan Rapinoe, has five goals in the tournament to lead the field for the Golden Boot. Australia’s Sam Kerr also scored five, but the Matildas were eliminated in the round of 16.

Rapinoe has been particularly dangerous in the past two games, scoring twice in a 2-1 victory over Spain in the round of 16 before another brace in the 2-1 quarter-final victory over France. The performance in Paris on Friday night came as Rapinoe was embroiled in controversy over a video that surfaced of her saying she wouldn’t visit the White House if the Americans win the World Cup. President Donald Trump subsequently called her out on Twitter.