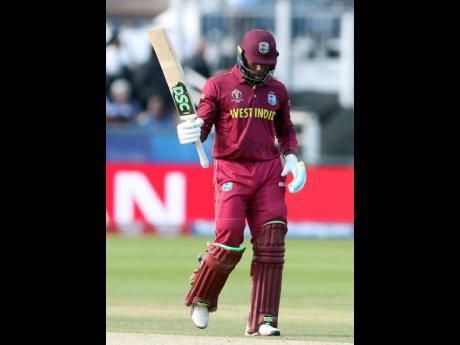 AP
West Indies batsman Fabian Allen raises his bat after scoring a half -century during the Cricket World Cup match between Sri Lanka and the West Indies at the Riverside Ground in Chester-le-Street, England, on Monday, July 1, 2019.

West Indies’ 23-run defeat at the hands of Sri Lanka on Monday has done little to dent the confidence of all-rounder Fabian Allen.

The 24-year-old slammed a 30-ball 51 – his maiden international half-century – as West Indies came up short in their pursuit of 339 for victory at Riverside to suffer their sixth defeat in eight matches at the ongoing ICC World Cup.

“It was a good all-round performance, my second game, so I hope I can contribute as much as I can,” said the Jamaican, who bats right-handed and bowls left-arm spin.

“I just have to transfer that into my game and go out there and be Fabian Allen, look to execute and accomplish my goal – that is to give the best I can and make my family proud.”

He added: “When I go out there, I have a winning mindset. I had a clear mind and a clear plan. Once you hold the situation, you have to execute the plans you have.

“It is the last game [on Thursday against Afghanistan], so we are just looking forward to finishing on a high.”

West Indies were slumping at 199 for six in the 35th over when Allen combined with Nicholas Pooran, who struck a sparkling 118 off 103 deliveries, in a rollicking 83-run, seventh-wicket stand to revive the innings.

With the tide turning in the Caribbean side’s favour, Allen was tragically run out after belated responding to a call for a quick single from Pooran and finding himself well short at the non-striker’s end.

Allen, playing only his ninth One-Day International and second World Cup match, said his dismissal had been the turning point in the run chase.

“It was a good innings, but unfortunate to get out at the end there. That cost us the game,” he acknowledged.

“I wanted to give Pooran the support, give him a bit more of the strike, but the run-out was a disappointing moment.”

He continued: “It is all about execution. Once you have that, you can accomplish anything. It is always my job to contribute. Once I go out there, I look to contribute as best I can. I am the last batsman in the pavilion, so that changed everything.

“We (he and Pooran) have batted together at Under-19 and Global T20, so we understand each other’s game. We have played the CPL as well back home. I know how to win games.”