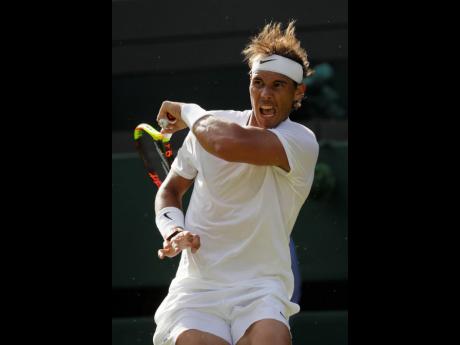 Nick Kyrgios delivered an underhand serve on set point at Wimbledon yesterday. He hit a ‘tweener lob. He dived for a volley unnecessarily. He complained about someone’s camera he found too big ... and someone’s talking he found too loud ... and reporters’ questions he found too silly.

In other words: It was just an average day in the life of Kyrgios, one of the most talented, mercurial and – depending on the beholder – entertaining-slash-confounding tennis players there is. And now, after his this-way-and-that, up-and-down-and-sideways 7-6 (4), 3-6, 7-6 (10), 0-6, 6-1 victory over long-time pal Jordan Thompson in an all-Australian match-up, Kyrgios will take on Rafael Nadal in the second round tomorrow.

“I mean, just because I’m different, I go about it a different way, it causes a stir,” Kyrgios said.

Kyrgios vs Nadal is intriguing as can be.

First of all, Kyrgios, then just 19 years old, burst on to the scene at the All England Club in 2014 by beating Nadal to become the youngest man to eliminate the No. 1 player at a major tournament since 2005. Add to that a public spat involving Nadal, his uncle and Kyrgios in recent months, and get the popcorn ready.

“Not sure that me and Rafa could go down to the Dog & Fox and have a beer together,” Kyrgios said, referring to a nearby pub. “I don’t know him at all.”

Nadal’s immediate response when asked about the tiff?

The ‘Kyrgios Experience’ was in full effect yesterday. He trailed 5-2 in the opening set and faced a pair of set points there before coming back to grab that set. In the third set, he wasted seven chances to close it before finally converting his eighth. Then, lead in hand, he went away for the 18-minute fourth set, outscored 24-5 in points. And for one final twist, he dominated the fifth set.

“There were a lot of ups and downs. Five sets of tennis against Nick – anything can happen out there,” said Thompson, who has known Kyrgios since they were eight or nine and is a frequent opponent in video games. “It’s tough. But everybody that plays him knows it’s going to be tough. He’s going to be in and out, and you’ve just got to keep your own concentration.”

Sam Querrey’s best Grand Slam tournament is Wimbledon. That also happens to be Dominic Thiem’s worst major. So maybe it made perfect sense that Querrey, an American ranked 65th, would grab the last nine games and upset No. 5 seed Thiem 6-7 (4), 7-6 (1), 6-3, 6-0 to make the French Open runner-up the third top-10 man already gone from the All England Club.

Querrey was one point from falling into a two-set deficit while serving down 5-4 in the second. But he saved the break point there, held, then took a lead by getting his initial break of the match to go up 4-3 in the third set.

Thiem, meanwhile, now has three first-round departures at the All England Club in six appearances. It is the only major where he has fewer than 10 career victories – and the only one where he has a losing record, 5-6.