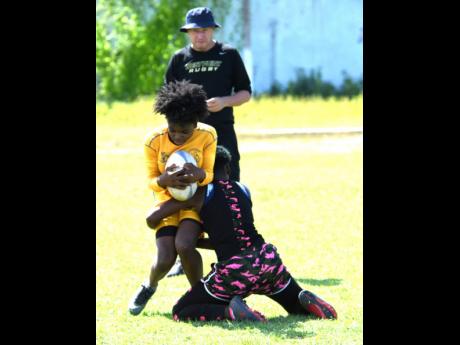 Ricardo Makyn
Members of the Jamaica rugby union Lady Crocs team participating in a training session under the watchful eye of coach Stephen Lewis at Emmett Park on Saturday, June 29, 2019.

Despite being unveiled as the new coach of Jamaica women’s rugby union team only a few days ago, Stephen Lewis has already been making a marked improvement in their quality of play, says Sasha-Gaye Green, captain of the Lady Crocs.

With only a few days to go before the Rugby Americas North (RAN) Sevens tournament in the Cayman Islands, she is confident of a good showing under his guidance.

A physical education teacher at the Green Pond High School in Montego Bay, St James, Green explained that one of her goals as a player is to become an ambassador of sorts for her sport and to increase the popularity of rugby among young girls across the country.

“I just want to improve female rugby in Jamaica generally, just to have young girls in high school coming out to play the sport,” Green said. “Basically, to have females starting at a young level, coming in and learning the skills, then going forward to make it in the national programmes.”

The Lady Crocs will begin their RAN Sevens campaign this weekend on July 6 against Bermuda at the Truman Bodden Sports Complex, and Green is expecting to challenge for a spot in the 2020 Tokyo Olympics as a result.

“We’re going there to perform at the best of our abilities. Once we are in the finals, we’re going to the repéchage play-offs. That’s all we can ask for; that’s what we’re aiming for.”