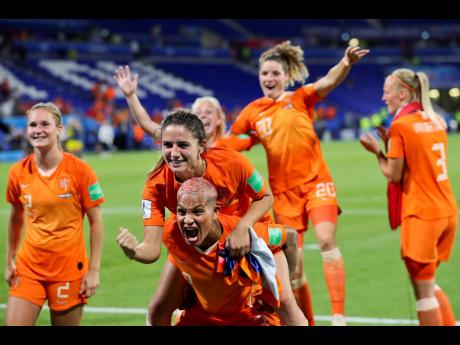 Sweden’s World Cup title bid was ended by one-touch Dutch magic. It only took a few seconds for the Netherlands to carve Sweden open from midfield to the edge of the penalty area, where Jackie Groenen advanced to hit a superb low shot past goalkeeper Hedvig Lindahl.

She was powerless to stop Groenen’s effort after having made excellent saves to tip Netherlands top scorer Vivianne Miedema’s looping header on to the crossbar and likewise push over an effort from Shanice Van de Sanden in the second half.

Lindahl was furious at the final whistle, ripping off her gloves and throwing them violently to the floor.

Then she aimed a kick at one of them, sending it flying.

“Sad, disappointed, upset, really,” Lindahl said. “I felt like we had a golden opportunity to take this team to the final, and we didn’t take it. Very disappointed. “

“Football is very much about emotion,” he said. “However you react or respond is down to each individual.”

Sweden needed to do more than rely on their goalkeeper. The forwards didn’t have enough impact, especially considering Sweden’s best effort came when veteran defender Nilla Fischer’s shot was pushed on to the post by goalie Sari van Veenendaal.

“You’re not going to get a lot of chances against a team like this in a semi-final. It’s always about skill in these situations,” Gerhardsson said. “It’s not about being unlucky or lucky. Nilla’s attempt, it’s not about luck that it hit the post, it’s about scoring the chances you get.”

There simply wasn’t enough creativity from Gerhardsson’s side.

While Sweden centre forward Stina Blackstenius’ hold-up play and excellent ability to turn both ways caused the Dutch backline problems, it also meant that she was rarely in the penalty box and her teammates could rarely find her. Blackstenius came off in the second half of extra time.

Sweden’s lack of cutting edge was summed up near the end of injury time, when attacking midfielder Kosovare Asllani found some space on the left and clipped an inviting cross over the defence.The Dutch fans watched nervously from the other end of the field as the ball sailed towards the unmarked back post. But there was no one there to take advantage of it.

“It’s difficult to play attacking football sometimes when you’re in possession. I don’t know if it was down to stamina (but) I felt we missed a few passes as well,” Gerhardsson said.

“It might have been tiredness ... players hitting the ball when they find themselves in a position they shouldn’t be in.”

Sweden’s players formed a circle following the game to console each other after missing out on a second World Cup final. Sweden lost to Germany in 2003.

Lindahl broke away to applaud the Swedish fans behind the goal.

“A feeling of emptiness, really. You’re not angry, or sad,” Gerhardsson said. “Of course you’re not happy. You’re empty. That’s how I feel right now.”