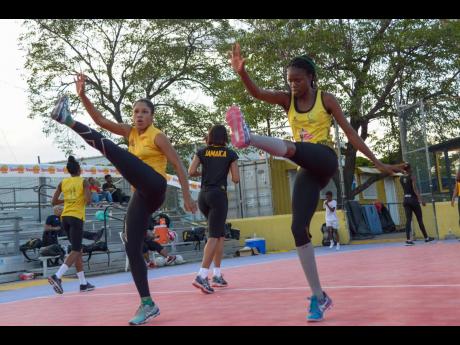 Shorn Hector
Sunshine Girls Adean Thomas (left) and Nichole Dixon go through their paces during a recent training session at the Leila Robinson Courts at the National Stadium.

With just over a week to go before the start of the Netball World Cup (NWC) in Liverpool, England, David Perry, fitness coach of the Sunshine Girls, said the Jamaicans are in excellent shape going into the tournament.

The Sunshine Girls, who moved up one spot to second on the International Netball Federation (INF) world rankings on Monday, have been often criticised for their lack of endurance in the second half of their matches.

However, Perry, who has been working with the Sunshine Girls for the past two years, said the Jamaicans have improved their stamina significantly and are now ready to show their improved staying power at the championships.

“They are very fit because they have passed the standard test, and they will be ready for the World Cup,” said Perry. “Their body weights are down because that is one of the things that I have worked on during the sessions with them.”

“Everybody is lean, and they really look like they are ready for the championships,” Perry said.

The trainer noted that the Sunshine Girls were very appreciative of the methods that he used during their fitness sessions and thay they responded positively throughout the process.

“The fitness sessions was not easy, but the girls accepted what I was doing ... they really bought into what we were doing,” Perry said.

“Everybody did what they were supposed to do, and so I am very proud of them,” Perry shared while adding that the Jamaicans have improved a great deal since he took over their fitness programme.

“These girls are going to last for the entire match. Even looking at last year when we went to the Commonwealth Games, I have seen where their stamina has improved,” he stated.

“This is one of our most aggressive teams going into the World Cup. They have really matured,” said Perry.

“They have also got a lot stronger over the period of time that I have been working with them, and so I am expecting great things from them at the World Cup,” he said.

The Jamaicans have been drawn in Group C along with South Africa, Trinidad and Tobago, and Fiji. They will get their campaign started against Fiji on July 12.