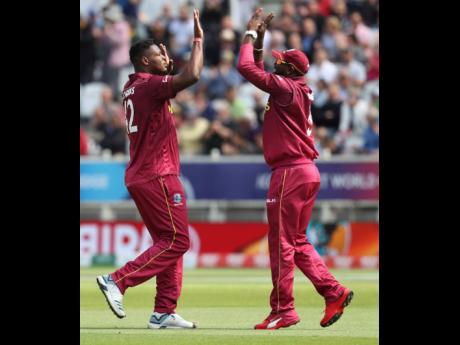 West Indies will aim to prevent an already failed World Cup campaign from ending in a complete travesty when they take on dangerous minnows Afghanistan in their final outing here today.

After opening the tournament with a dominant win over Pakistan on May 31, the Windies have seen their campaign go off the rails with six defeats in seven matches, leaving them ninth on three points and only above their Afghan opponents, who are still winless.

With little pride to play for after already recording their worst World Cup showing ever, today’s contest at Headingley is a must-win for the Windies if they are to return home with any semblance of dignity.

Assistant coach Roddy Estwick told media here, Monday, despite the wretched run of results, players had not allowed their heads to drop and were looking forward to finishing the tournament with a victory.

“Surprisingly, driving down from Durham, after the loss, surprisingly, the mood in the camp was still good,” Estwick said in reference to the 23-run defeat to Sri Lanka at Chester-le-Steet on Monday.

“The boys on the bus were still playing dominoes, the spirit in the dressing room was tremendous. And that can only serve us well going forward, so we’re happy from that point of view.

“Obviously, we’re not happy losing games, but we started to build something, and once we can remain patient and we can keep building, young players are coming through, and once that keeps happening, then things will get a lot better.”

West Indies will need to exercise an abundance of caution against an Afghan side coached by former West Indies batsman Phil Simmons, who, in the past, served as the Caribbean side’s head coach.

In their five meetings to date, West Indies have lost three, and more instructively, have lost the last two outings – at last year’s World Cup qualifiers in Zimbabwe.

Like West Indies, Afghanistan have been guilty of squandering winning positions throughout the tournament. They squeezed Pakistan here last Saturday before surrendering with two balls to spare and were 104 for two in pursuit of 263 against Bangladesh before collapsing.

In Southampton, they held powerhouses India to 224 only to lose by 11 runs after seamer Mohammed Shami snatched a final-over hat-trick. West Indies are well aware of the danger posed by Afghanistan, and Estwick said he backed his side to produce the performance necessary to win today.

“I remember our backs were against the wall against England [in the Leeds Test in 2017]. We had lost badly at Birmingham,” he recalled.

“Everybody was saying the final day that we were going to lose to England badly as well. We chased [324] down. So hopefully tomorrow with backs against the wall we can come up with that kind of performance and we can finish on a high.”

The tournament has been one of near misses for the Windies. They were 190 for four in pursuit of 289 to beat Australia and lost by 15 runs at Nottingham and then failed to defend 322 against Bangladesh in Taunton after asking the Asians to mount a record run chase.

They came within five runs of beating New Zealand in Manchester and then also fluffed their lines against Sri Lanka.

Not for the first time, Estwick acknowledged that West Indies had failed to properly negotiate the “big moments” during several games.

“Looking back over the eight games that we played, I mean I personally thought that we should have won four of those. We were very, very close,” he lamented.

“We just didn’t play the big moments well and hopefully we can learn from that and we can move forward and we can plan for the next one.”