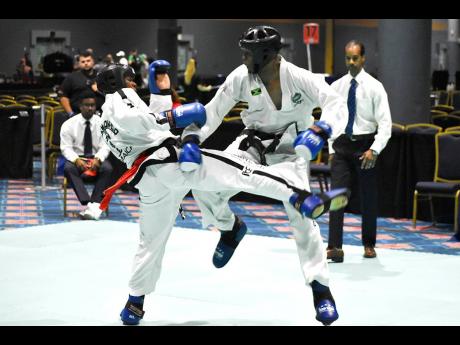 Though stepping up in weight divisions and looking bulkier than their normal, svelte, fighting best, Canada-based Edwards and Dusard used economy of energy, technique, and ring craft to see off their overly enthusiastic younger rivals in the middle (-70kg) and heavyweight divisions, respectively.

Eager to overthrow the stalwarts in the newly created taekwondo division at the US Open, the world’s biggest martial arts tournament, the younger generation loudly cheered on Adrian Moore, who took the mat against Dusard in the first middleweight semi-final.

However, Dusard avoided his rival’s reach and counteracted quickly to score points, getting the nod from all four judges, techniques garnered from his vast experience on the international circuit.

Trevor Webb Jr enjoyed a similar margin of victory over Donald Francis, who might have been feeling the effects of a gruelling grand-champion title win at last week’s Seido Open in Jamaica, in addition to arriving at the tournament venue after 1 a.m. yesterday, his flight delayed multiple times due to bad weather.

In the final, Dusard proved too strong for Webb Jr, who fought gallantly but was no match for the combined team veteran, who weighed in at 68kg and had clearly done some fine-tuning in anticipation of the youngsters’ challenge.

Edwards against the super-hyped Akino Lindsay was the most anticipated showdown but spectators had to first watch Richard Stone easily get past Rasean Martin 3-1 in the first semi. Lindsay, Jamaica’s top International Sports Karate Association fighter last season, went full blast from the start but accumulated too many penalties in what could have been a close match, which was decided with three judges favouring Edwards and the other calling it a draw.

Stone, the last of the Turks, fought a technical final but racked up too many penalties for stepping outside the mat in a close contest, which one judge awarded to him but two saw it going Edwards’ way and the fourth calling a draw.