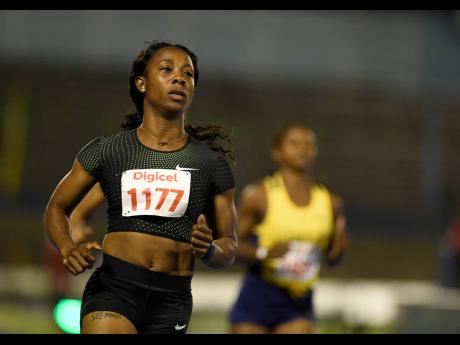 Today’s Lausanne Diamond League will feature several big confrontations, which are certain to bring Swiss fans to the edge of their seats. Led by superstar Shelly-Ann Fraser-Pryce, nine Jamaicans will be in the thick of things, with triple jumper Shanieka Ricketts and shot putter Danniel Thomas-Dodd perhaps having the best chances to triumph.

Thomas-Dodd has already raised her national record of 19.48 metres this season and was second to World champion Gong Lijiao of China at the Prefontaine Classic on Sunday. With Gong not entered for Lausanne, the Commonwealth champion could get the better of 2015 World gold medal winner Christina Schwanitz of Germany, Poland’s European Champion Pauline Guba and Chase Ealey of the United States, who has a yearly best of 19.67 metres.

Two-time Commonwealth champion Kimberly Williams is just coming into form, so recent national champion Ricketts will lead the Jamaican triple jump challenge. The last two world champions, Yulimar Rojas and Caterine Ibarguen will be there too but Rojas, the slim Venezuelan, is the only girl to past 15 metres this year.

Ricketts raised her personal best to 14.76 metres in February and backed it up at the Nationals with a 14.73 metres winner.

Four of the world’s top five long jumpers will meet, including Jamaica’s Tajay Gayle. The presence of Luvo Manyonga, the 2017 World Champion, and new Cuban threat Juan Miguel Echevarria make this event a must see.

Meanwhile, with times of 10.97, 10.88 and 10.73 seconds, Fraser-Pryce had been going brilliantly, but a tired looking effort at the Prefontaine Classic yielded a modest time of 11.39 seconds and eighth place. Ivorian Marie-Josee Ta Lou, winner of the Prefontaine race, and speedy Brit Dina Asher-Smith, who has gone 10.94 so far this season, are expected to provide the toughest test for the medal-mining Jamaican.

Ronald Levy closed fast for third in the 110 metre hurdles on Sunday. The 2018 Commonwealth gold medal winner will need a quicker start in Lausanne to subdue Olympic runner-up Orlando Ortega of Spain and American Daniel Roberts, who is making his professional debut after clocking 13.00 seconds at the recent NCAA Championships.

Commonwealth 400 metre hurdles queen Janieve Russell will hope to bounce back from disappointment at the National Senior Championships. Fourth in Kingston, Russell will fight a formidable field including two-time world champion Zuzana Hejnova of the Czech Republic and reigning world champion Kori Carter of the USA.

The women's quarter-mile will see two Jamaicans entered, with World and Olympic bronze medal winner Shericka Jackson, the second fastest athlete in the world so far this year with 49.78 seconds and Stephenie-Ann McPherson, world and Olympic finalist, coming up against Diamond Race leader Salwa Eid Naser from Bahrain and American Courtney Okolo.