Tanya Lee | This could have been Jamaica’s Gold Cup 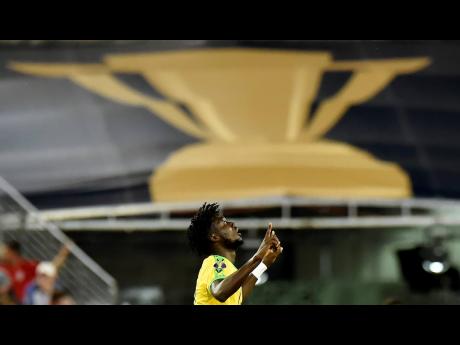 Mark Zaleski
Jamaica forward Shamar Nicholson celebrates after scoring a goal against the United States during the second half of a CONCACAF Gold Cup semi-final match on Wednesday in Nashville, Tennessee. The United States won 3-1.

So another Gold Cup competition has come and gone for Jamaica, and after making the final on the last two occasions, the Reggae Boyz failed to advance beyond the final four. A bit disappointing considering that Jamaica had such an impressive forward line, and the usual powerhouses of Mexico and the USA have not looked as impressive as former years. I think this outing was our best opportunity to lift the Cup, but that belief was not evident in Tappa’s tactics, considering his defensive start to Wednesday’s semi-final against the USA.

Jamaica have to, going forward, work on our transition from midfield to attack. Our attackers wasted countless chances, possibly because most of our opponents pressed us high, and thus we were forced to kick the ball long, leaving our strikers with more work to do, considering that they are largely more accustomed to running with the ball at their feet.

But, of course, kudos must go to a few players who were proficient throughout the tournament. Save for the accumulation of yellow cards, which cost us his services in the crucial semi-final encounter against the USA, Whitmore has found an impressive and stable defender in the steely Damion Lowe, who reads the game very well and shows real leadership on the backline. Lowe was markedly missing against the USA and may have been the main Achilles heel that cost us the tournament. The usually sound goalkeeping from André Blake was also missing, possibly given the constant pressure under which he came, thanks to our leaky defence.

Shamar Nicholson, in his first major tournament, was surprisingly exceptional, considering that he has not even played youth football for Jamaica. Nicholson was impressive in changing the game, being a willing passer, pressing his opponents and finding himself in the right situations.

A young Peter Lee Vassell should have been allowed to make more of an impact throughout the tournament. The exclusion of Vassell from the Panama and El Salvador encounters was, to me, baffling, given that he is our most creative midfielder, and ironically, in many respects, a talent that is similar to the creativity of Whitmore himself. It wasn’t exactly fair to Vassell, given his inexperience, to throw him to the wolves in the semi-final. One wonders what was in Whitmore’s thoughts in only utilising him on the tougher encounters.

Leon Bailey is a well-needed addition to the Reggae Boyz squad and showed flashes of brilliance and a sound technical game. Bailey is in many respects superior, but on occasion, seemed unsure in front of goal. He improved as the tournament progressed and he found more chemistry with his teammates. But I, personally, did not expect much from Bailey, given the rust from his recent injury and limited playing time at the end of his domestic season. In the future, Bailey will give a more solid display in keeping with his talents.

There were some players from whommuch more will be required. Devon Williams was often out of position and wasn’t precise in passing and didn’t pose much threat to our opponents. Brian Brown has to exhibit more energy if he is to continue in the national colours. Je-Vaughn Watson didn’t seem to have the legs in any of the encounters and his best days are long behind him. Junior Flemming was good at attracting fouls, but his forward passes could have been more precise. Michael Hector didn’t seem in command of his defensive areas and was often tentative and late to the challenge, which cost us dearly on a number of occasions. Hector seemed more effective in central midfield where his lack of mobility was less evident.

Alas, Whitmore still hasn’t figured out his best 11. There is still no cohesion from defence to attack. With a largely young and talented team at his disposal, we still look forward to seeing a more clear football philosophy and tactical game in the future. This could have been Jamaica’s Gold Cup. One love.