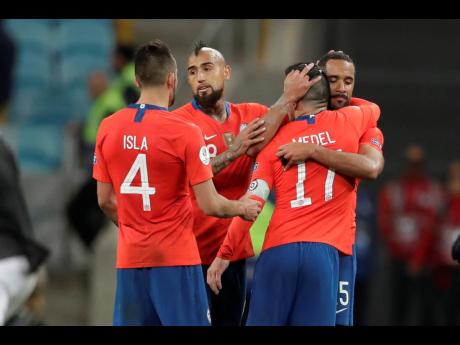 Silvia Izquierdo
Chile’s players react after loosing their Copa America semi-final match at the Arena do Grémio in Porto Alegre, Brazil, on Wednesday. Peru defeated Chile 3-0 and qualified for the final.

It was a tough way for Chile to see their dominant run in the Copa América come to an end.

The team’s demise after two consecutive South American titles came when they least expected, and in a painful way.

It was long-time rival Peru, a heavy underdog, which ended Chile’s impressive run with a 3-0 win in the semi-finals on Wednesday.

The demoralising loss at the Arena do Grêmio ended Chile’s hopes of becoming the first nation to win three straight South American titles since Argentina in the 1940s.

It was an especially tough defeat against a rival they have had a quarrel with since the War of the Pacific in the 19th century, when Chile defeated a Peru-Bolivia alliance and took over some key land with access to the Pacific Ocean.

The Chileans admitted that they didn’t see it coming.

“We entered the match already thinking about the final, and that’s how we allowed Peru to surprise us,” said Chile coach Reinaldo Rueda, a Colombian who took over the squad last year.

Chile were heavily favoured against a Peruvian squad that barely survived the group stage and hadn’t made it to a Copa América final in more than 40 years. Chile had won seven of the last eight competitive matches against Peru, including in the 2015 semi-finals.

“It’s a bitter loss,” Rueda said. “We were looking forward to the final, but we couldn’t take that first step against Peru.”

Chile had impressed in the first round, with their only loss coming against title favourite Uruguay when Rueda rested some regular starters. In the quarter-finals, Chile eliminated Colombia, which had the group stage’s best campaign.

Now the team will have to find strength to prepare for tomorrow’s third-place game against Argentina, a repeat of the last two Copa América finals.

It could be the final match for many of the members of Chile’s golden generation, which has been under pressure since failing to qualify for the 2018 World Cup in Russia. Veterans Arturo Vidal, Alexis Sánchez and Eduardo Vargas all struggled on Wednesday, further raising questions about the generation’s demise.

In addition to the consecutive Copa América titles, Chile also made it to the final of the 2017 Confederations Cup, losing to Germany.

Rueda had already been criticised for the team’s poor results after he took over, and the Copa América loss to underdog Peru left him under added pressure.

Chile’s next competition will be qualifying for the 2022 World Cup, beginning in March.

Peru will play the Copa América final against host Brazil on Sunday.