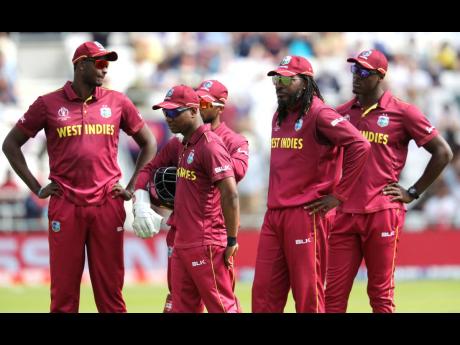 Rui Vieira
West Indies captain Jason Holder (left) and team-mates get together for a drinks break during their Cricket World Cup match against Afghanistan at Headingley in Leeds, England, on Thursday, July 4, 2019. The West Indies won by 23 runs.

Captain Jason Holder expressed relief after West Indies finally broke their losing slump in their final match but lamented the inconsistency that saw the Caribbean side produce their worst-ever showing at a World Cup.

The Windies signed off on their campaign with a 23-run victory over minnows Afghanistan, halting a wretched run that saw them lose six of their last seven matches and finish the tournament with only two wins in nine outings.

“I think inconsistency let us down. We were just inconsistent in all three departments,” Holder said following the win at Headingley on Thursday.

“I think our fielding needs a lot of improvement, [but] I think the bowlers had a really good outing – credit to each and every bowler who put up their hand whenever called upon.

“In terms of the batting, it was very, very inconsistent, as well, and I think going forward, we need to be a lot more consistent.”

West Indies won their opening match on May 31 when they thrashed Pakistan but then failed to win another as their form deserted them.

They were guilty of squandering winning positions in a few encounters, most notably against New Zealand at Old Trafford two weeks ago when they lost by five runs and against Sri Lanka at Chester-le-Street when they went down by 23 runs last Monday.

And even on Thursday, the Windies did not have things all their own way. They were restricted to 200 for four after 40 overs before the floodgates opened in the last 10, and they managed to get up to 311 for six off their 50 overs.

Man of the Match Shai Hope top-scored with 77, while left-handers Evin Lewis and Nicholas Pooran both got 58.

Afghanistan then put the Windies under some pressure when they cruised to 138 for one in the 27th over behind half-centuries from 18-year-old Ikram Ali Khil (86) and Rahmat Shah (62) in a 133-run, second-wicket stand.

Seamers Carlos Brathwaite (4-63) and Kemar Roach (3-37) wrecked the middle and lower order, however, as Afghanistan lost their last eight wickets for 99 runs.

“The batters stepped up today, and we started off really well with Evin and Shai. They got a really good partnership going in the middle for us, and then at the back end, myself and Pooran were able to finish the innings quite nicely.

“Three hundred on that pitch, I thought, was par or good enough to be a winning total. We didn’t start as well as we would’ve liked; wickets were a little bit tough up front. They had a really good partnership up front, but we stayed strong and came through at the very end.”