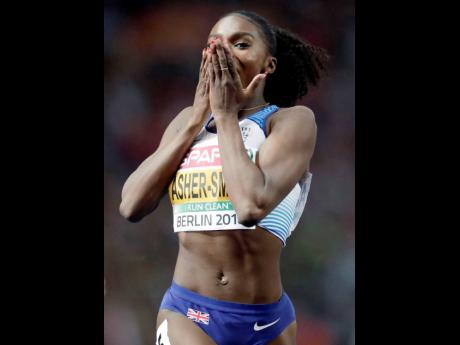 Jamaicans aren’t the only ones who are pleased with the fast times Shelly-Ann Fraser-Pryce has put down in the 100 and 200 metres this season.

Among those in awe of the four-time World champion is British sprinter Dina Asher-Smith.

Speaking in Switzerland on Thursday, Asher-Smith said that the comeback by Fraser-Pryce has been inspiring and amazing.

Double European champion last year, the 2014 World Under-20 100 metres gold medallist told reporters, “It’s been a joy to watch as both a fan of Shelly-Ann – because obviously, I remember watching her in Beijing – but also now a competitor. I think it’s been really inspiring and amazing.”

The 23-year-old made it known that the Jamaican’s run at the London Diamond League meet last year signalled a successful return.

Fraser-Pryce zipped 10.98 seconds in the 100 metres there, her first sub-11 clocking after giving birth to her son.

The 10.73 came at the Jamaican National Championships and gave Fraser-Pryce a share of the fastest time in the world. In addition, it made even more of an admirer out of Asher-Smith.

“Lots of people tell you what you can and can’t do as a female athlete, so the fact that she’s had a child, had a break, and got, like she said, a renewed sense of focus and motivation and come and run amazing world-leading times already in the season, I think it’s absolutely amazing, and I think it’s very cool.”

Asher-Smith is no slouch herself. In addition to her World Under-20 title, she has made the finals of three consecutive World 200 metres finals, and she took the bronze ahead of the Jamaican’s training partner, Elaine Thompson, at last year’s Commonwealth Games. She peaked beautifully at the European Champions with gold-medal wins clocked in 10.85 and 21.89 seconds on the same Berlin track where Fraser-Pryce won her first World Championships 100m title in 2009.

Fraser-Pryce clocked 10.74 seconds to win the 100m at the Lausanne Diamond League meet yesterday, with Asher-Smith finishing second in a season’s best of 10.91 seconds.