Mahfood supports JOA call for sports as catalyst of change 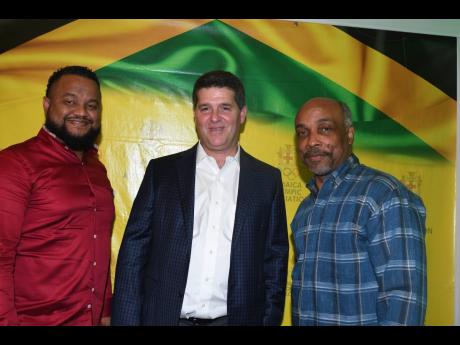 William Mahfood, chairman of the Wisynco Group, is advocating strong support for the Jamaica Olympic Association (JOA) initiative to use sports as a catalyst for change in society.

Mahfood shared his views while delivering the keynote address at the JOA’s lecture series, which forms part of its celebrations for Olympic Week, at Olympic Manor, the JOA’s Cunningham Avenue headquarters in Kingston, on Wednesday evening.

In a presentation centred around the theme for Olympic Week – Move, Learn, Discover – Sports as a catalyst for social change, Mahfood commended the JOA for choosing a very pertinent, thought-provoking and actionable topic for this momentous occasion.

He said: “Ladies and gentlemen, this evening I charge every one of us present to work assiduously to inculcate the spirit of sports and sportsmanship in every child in Jamaica – for glory in sports goes beyond the medals and the limelight. Sports is a vital catalyst for community development, social and behavioural change, for honing and building Jamaica’s future leaders,” noted Mahfood.

He highlighted the success of the nation’s athletes in a number of different disciplines, namely track and field and football, and pointed to the transformational impact it has made on society by influencing behaviour patterns through grassroots development.

“It is evident that the investment made early in life, from sowing that seed to see it grow strong, take roots and become a robust tree, the returns have been high and consistent. These investments in sports have impacted our culture positively,” he said.

In track and field, for instance, Mahfood referenced preparatory work for foundation events like Sports Day, ‘Champs’ and Penn Relays, and for football, the Reggae Boyz, to further strengthen his point on the wide-scale spin-offs that come from sports’ regimentation, practice and achievement.

“This, ladies and gentlemen, speaks to social change–how children evolve into responsible adults, how sports assists in their growth and helps them to mature. These interactions impact them throughout their life; preparing them to be able to work effectively with people of many differing characteristic traits as well as understanding the need for inclusion.”

“Sports in any form bring about a sense of competition. Crucially, it teaches us ethics, integrity and ambition; there is that adrenaline rush in sports, it challenges us – and above all, sports is a medium that brings about positivity through achievement,” reasoned Mahfood.

He said: “It is ironic that Jamaica, which boasts one of the largest percentages of women business leaders anywhere in the world, has sports like women’s football, netball, cricket and swimming that are struggling to find resources and support – this must change.”

Head of the JOA’s leadership, President Christopher Samuda, and General Secretary and CEO Ryan Foster, who have been driving a revolutionary change for the way in which the JOA operates both as a business and towards uplifting society, endorsed Mahfood’s message.

Samuda, who recently participated in activities celebrating Olympic Week at the birthplace of the Olympic Movement, Lausanne, Switzerland, said: “The JOA, through the staging of ‘Olympic Lecture’, is fulfilling one of its mandates, that is, to inform, educate and enlighten as we seek to build capacity, institutionalise knowledge and identify expertise in transforming sport. We have started a different, creative and riveting conversation on the development and monetisation of sport, and William and the Wisynco Group have joined us as solid partners.”

Samuda added: “Sport education is our stock in trade, and the Olympic lectures are designed to give practical value to our members and to bring corporate Jamaica, academia and industry stakeholders into an enabling relationship with the JOA.”

Foster said: “The lecture today by William was excellent and well received. The JOA is a catalyst for change through sport, and since this new administration has taken the reins of JOA we pride ourselves on being change-makers and legacy builders.

“William’s comments were thought-provoking and relevant to issues that are current and issues that we as a sports apex body are committed to resolving,” he added. “We not only see ourselves as a sporting body, but as an organisation that believe it is our duty to be a part of the economic discussion, child advocacy, finding ways to resolving crime and violence through sport, and the creation of wealth by creating avenues for our people; not just in traditional forms of sporting disciplines, but in bridging the gap in gender equality. Sport is not just a physical activity,it is a lifestyle.”