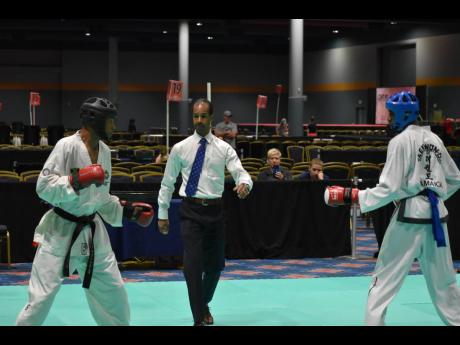 Bernard, a Jamaican who started tae kwon do at the age of 10 while living in Germany, winning triple gold at the 2003 Australian Open for the US, who he went on to coach, described the new division as “amazing experience and exposure for ITF tae kwon do as an event”.

“This is not about any one group. All groups are welcome to showcase their skills. This is what the late founder, General Choi Hong Hi, would have seen as being ideal,” Bernard pointed out, skirting the issue of division in ITF tae kwon do.

Held on Thursday’s second day of the US Open at the Coronado Springs Resort in Orlando, Florida, the International Taekwondo Associations US Open Challenge Championships was a complete Jamaican production with international judges to ensure that the tournament’s standards were upheld.

“I think it will continue to grow, said Bernard, an international A Class umpire who officiated the division.

“This was the first year at the US Open, the world’s biggest martial arts tournament, a big promotion for the ITF, which is already experiencing growth by being featured annually on ESPN-televised Saturday’s Night of Champions,” he added.

Well supported by international participants in the junior ranks, the new ITF division drew spectators who were treated to the best of Jamaica’s combined martial arts team members, who squared off in a battle of the young Turks against the old guard.

Veterans Nicholas Dusard and Edwards had to call on their vast international experience to secure gold medals in the middle and heavyweight divisions, respectively.

Dusard got by Adrian Moore and Trevor Webb Jr, whereas Edwards defeated Akino Lindsay and Richard Stone, staving off the youngsters in exciting matches.