No easing up for Australia at Cricket World Cup 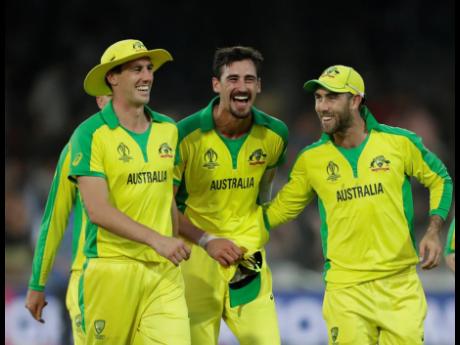 With their place in the semifinals sealed with two group games to spare, Australia’s players might have been forgiven for briefly easing off amid a long and grueling Cricket World Cup schedule.

Hasn’t turned out that way.

The defending champions fielded a full-strength team in their penultimate group match — an 86-run win over trans-Tasman rivals New Zealand — and are likely to keep the big guns in the line-up for today’s contest against South Africa in Manchester as they look to clinch a first-place finish in the standings.

The intensity has persisted in training, too.

In what proved to be a brutal net session on Thursday, Maxwell was hit on the right forearm by left-arm paceman Mitchell Starc before Marsh was struck on the right wrist by another quick, Pat Cummins.

Both players were hospitalised, with Marsh — a middle-order batsman — ruled out of the tournament because of a bone fracture that requires surgery.

A sore Maxwell was given the all-clear, while batsman Steve Smith and pace bowler Jason Behrendorff were declared OK despite hurting their fingers in fielding practice.

An eighth group-stage victory for the Australians would guarantee them top spot, whatever second-placed India do against Sri Lanka earlier Saturday in Leeds. That would mean Australia returning to Old Trafford to take on New Zealand again in the semi-finals, a repeat of the 2015 title match.

As for the South Africans, they were planning for this game to be potentially make or break for their hopes of qualifying for the semi-finals.

All the jeopardy has been removed because of a disappointing campaign in which the Proteas have won just two of their eight games.

“When we looked at it, it was like, ‘Sure, Australia in the last game will be a great opportunity for possibly one or two of the teams to play the last game almost like a quarter-final,’” South Africa captain Faf du Plessis said yesterday. “But it isn’t the case now.”

Du Plessis said it still was an important match for his team, particularly because it would be the last at a World Cup for some of the players, who he didn’t specifically name.

“No one knows what is going to happen after this tournament,” he said.

“I don’t think it’s desperate times calling for desperate measures yet. I think it is just having a bit of time after this World Cup for everyone to go their separate ways and just sit and think what needs to be done.”

Du Plessis said David Miller was “not 100 per cent”, so South Africa would likely be unchanged from the win over Sri Lanka, meaning paceman Lungi Ngidi misses out again.