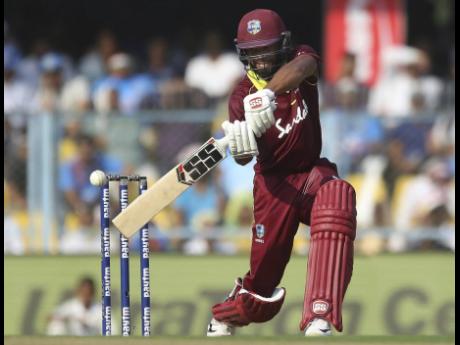 Stroke-maker Shai Hope says West Indies must use the disappointment of the ICC World Cup as a learning curve if they are to improve in coming years.

Speaking following the Caribbean side’s 23-run victory over Afghanistan in their final match of the tournament on Thursday, Hope said he and the side’s younger players stood to benefit from the experience despite the failed campaign.

“It was definitely a learning experience, something that I will never forget,” Hope told media here.

“Playing each team in this format, obviously, you have to be the better team on the day to progress in the tournament. But having said that, it’s a learning experience. I definitely gained something from it. Hopefully, myself and the younger guys can use this and take it forward into their career.”

He continued: “If you don’t improve and learn from this experience, then we’re not going anywhere, we’re not learning anything. I’m sure we’re going to use this as basically a platform for the next four years.

“And hopefully, we can have something stronger and build more momentum early in the tournament and take it on to the semis and the final.”

West Indies won their opening match on May 31 when they beat Pakistan by seven wickets at Nottingham but then lost six of their next seven matches – the South Africa fixture was rained off – to suffer elimination from the tournament.

They came close to beating Australia, New Zealand and Sri Lanka but Hope was at a loss to explain why West Indies were unable to convert.

“It’s just one of those things. As I said, we didn’t play the better cricket on the day, and in a tournament like this you have to basically play your best game each game,” he pointed out.

“As you muck up you’re basically out of the tournament, if you have a couple of bad games.

Because I think we lost some of those games in some crucial situations, but that’s basically it.”

One of the main regrets for the Windies was their defeat to Australia at Trent Bridge in their second match. They reduced the reigning world champions to 38 for four in the eighth over but then watched as the Aussies hit back to post 288.

West Indies looked in control at 190 for four in reply before losing five wickets for 83 runs in quick time, as their run chase unravelled.

“We had them in a very good position and basically allowed them to get that total,” Hope recalled.

“And I still think that we had a decent batting platform to chase runs. As I said, we didn’t play these situations as well as we could have. I thought that we let the game get away from us sometimes, and that cost us.”

He added: “It’s just that in a situation like that, if you have a team down and out, you have to really grind them to the end.”

Hope scored 274 runs from eight innings at an average of 34 with three half-centuries.