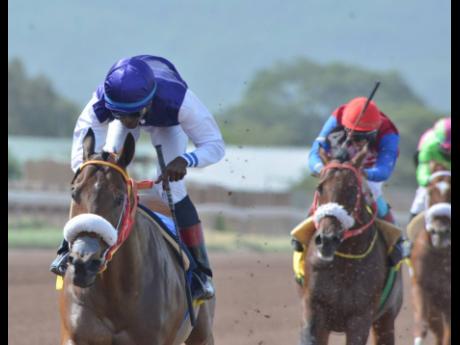 Kenyon Hemans
She’s a Maneater won the feature race at Caymanas Park yesterday, the None Such Trophy over six furlongs, with Omar Walker aboard.

SHE’S A MANEATER again proved her versatility in no uncertain manner, easily defending her None Such Trophy title with a commanding victory over ANOTHER BULLET, who had beaten her into fourth place in April’s Lady Geeta Trophy at five and a half furlongs.

Breaking sharply from post-position three in the five-horse field at six furlongs, the 2017 Horse of the Year, Triple Crown, two-time Superstakes and Diamond Mile winner, gave ANOTHER BULLET and MONEY MAGNET no opportunity to crowd her on the rail.

Accelerating rapidly, heading into the half-mile turn, SHE’S A MANEATER surged along the rail with Omar Walker and was never headed, straightening two lengths clear of ANOTHER BULLET and MONEY MAGNET, who attempted to spring an attack entering the straight.

SHE’S A MANEATER would have no part of an upset and kept on strongly with topweight 126lb, allowing ANOTHER BULLET 12lb in a three-and-three quarter length win, clocked in 1:11.0, blasting splits of 23.0 and 45.1.

Champion jockey Anthony Thomas landed the late double, UNCLE FREDDIE and SAINT MICHAEL, joining Aaron Chatrie with two winners on the afternoon. Chatrie booted home LALALA BAMBA at odds of 6-1 in the fourth and rounded off his two-timer astride 7-2 chance LADY BUDGET in the sixth.