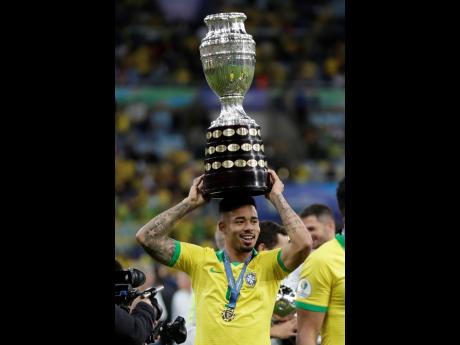 Andre Penner
Brazil’s Gabriel Jesus holds the Copa America trophy on his head as he celebrates his side’s 3 -1 victory over Peru during the final at the Maracanã Stadium in Rio de Janeiro, Brazil, yesterday.

Three Brazilian stars will return to their European clubs boosted by their good performances and a Copa América title.

Manchester City striker Gabriel Jesus, and Barcelona midfielders Philippe Coutinho and Arthur were among Brazil’s best in the campaign that led to their ninth Copa América title yesterday.

Éverton, Jesus and Richarlison scored for Brazil, which went down to 10 men in the second half after Jesus was sent off. Paolo Guerrero netted Peru’s only goal from the spot.

The 22-year-old Jesus was Brazil’s leading figure in the final, just as he was in the 2-0 victory against Argentina in the semi-finals.

Against Peru, Jesus not only scored but caused problems with dribbling on the right flank, good passing and effective tackling from box to box. He was sent off in the 70th after a second yellow and left the field in tears, punched the television used for video review, and still got loud cheers from fans.

The goal Jesus scored against Argentina was his first in an official match for Brazil since October 2017, in the 3-0 win against Chile in São Paulo in World Cup qualifying.

Less impressive than Jesus in the knockout stage but still effective, Coutinho scored a brace in Brazil’s 3-0 victory against Bolivia in the Copa América opener, and was key for his team’s high ball possession in all their matches.

Arthur also left a positive impression for his defending skills and intelligence in controlling Brazil’s flow. After Jesus was ejected in the final, the Barcelona midfielder took responsibility to calm Brazil down and make the team regroup.

The 22-year-old Arthur was also one of the main reasons Brazil conceded only one goal in the tournament — the one Guerrero scored from the spot.