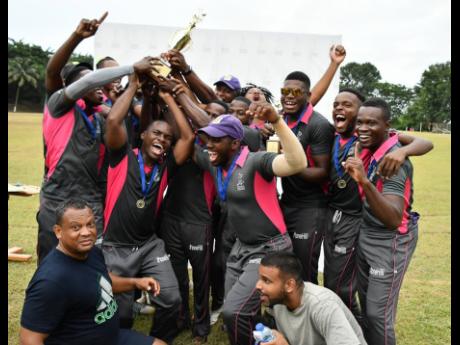 Kensington Cricket Club are the 2019 JCA Jam T20 Bashment champions after a six-wicket win over Clarendon Cricket Association in the final played at the Windalco Sports Club in Ewarton, St Catherine, on Saturday.

It was a long-awaited triumph for the Wavell Hinds-coached Kensington team, who were claiming their first senior cricket title in many years.

Batting first, Clarendon squandered what was a glorious opportunity to post a hefty total, as they were at one stage 85 for 3 in the 10th over.

Wayne Davis, 26, and Ricardo McIntosh, 22, gave the Clarendonians a good start, posting 59 for the first wicket.

Following their dismissal, Clarendon stuttered their way to 159 for 9 in 20 overs, with Jason Wedderburn top-scoring with 35 from 22 balls.

Denniel Griffiths was the pick of the bowlers with 3 for 26, while there was a wicket each for Nicholson Gordon, Jamie Hay, Ryan Francis and Delbert Gayle.

Santokie would, however, get his revenge, as he bowled Lynch for 17 to put the brakes on Kensington’s frantic start.

When Errol Thomas had Francis caught for 29, and Tieno Osbourne sent back captain Cassius Burton for 10 at 78 for 3 in the 10th over, the contest was becoming more and more tense for the teams.

However, a 72-run fourth-wicket stand between Leroy Lugg, 59, and Delbert Gayle, 29, took the contest away from Clarendon as Kensington eased to the target, posting 163 for 4.

An elated captain Cassius Burton said a total team effort was the catalyst for the win.

“This victory has been long overdue. All our hard work throughout the season has finally borne fruit, and I must commend the guys, especially our batters who took us home today.”

Losing captain Santokie said his team fell 20 to 30 runs short of what they believe would have been a more challenging total.

“I want to firstly say hats off to my team for putting up a fight in our first final. It has been a long road, we played well today. However, we ended up on the losing end and my team should take a lot of heart from that.”