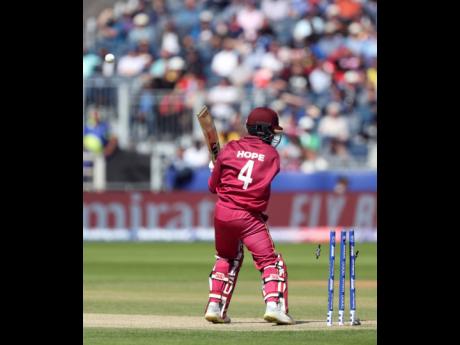 The players who represented the Windies at the ICC World Cup are by now presumably dispersed across the various regional territories licking their wounds after their worst-ever return at the showpiece event of cricket. The winners of the first two World Cup tournaments, in 1975 and 1979, registered a mere two wins from their nine matches played, the first time the Windies failed to win at least three games after participating in all 13 World Cup tournaments to date.

The Windies finished ninth of the 10 teams that participated, only ahead of fellow minnows and qualifiers Afghanistan. Predictably, the vibrant post-tournament analyses and have begun across the region and, indeed, across the world.

After watching all nine games involving the Windies, there was enough evidence of the presence of sound technical skills, talent and athleticism comparable to any other team in the tournament. The most telling disparity was in the level of cerebral application in the execution of those skills game by game. The players from those other teams played smart cricket, while the Windies players resorted to impulsive and instinctive play.

Not only is it simplistic to argue, but it is not quite true that the Windies players are just no good and that that is the reason why they performed so poorly. There is actually comparable quality in all the key areas of the game – batting, bowling, and fielding – in the Windies squad relative to the other teams in the World Cup. Those other players from other teams simply played more cerebral cricket, thus they made smarter decisions in the heat of battle than the West Indians, who made mostly rash decisions devoid of situational awareness and simple thought.

It was positively clear throughout this tournament that the Caribbean batsmen, bowlers, and, to a lesser extent, fielders were repeatedly guilty of not thinking out the key moments and situations in games and applying themselves accordingly. This invariably resulted in the batsmen giving away their wickets and bowlers leaking careless and unnecessary runs in numerous game-changing moments.

The reasons for the Windies players not adequately using their brains are varied. It could be argued that they were generally and comparatively inexperienced. It could also be said that Twenty20 (T20) cricket habits have got a hold of most of the region’s top players. However, players from the other teams are T20 experts, as well, who were still smart and professional enough to apply more thought, respect, and patience to the 50-over format, with the net result being better individual performances and better team results.

It might be harsh, perhaps even unreasonable, to classify individual West Indian team members as daft and brainless, but it is absolutely fair game and factual to state that many of the decisions made by the West Indian players during this miserable World Cup sojourn were indeed thoughtless, daft, and brainless ones, which effectively led to the embarrassing demise of the Windies team at this tournament.