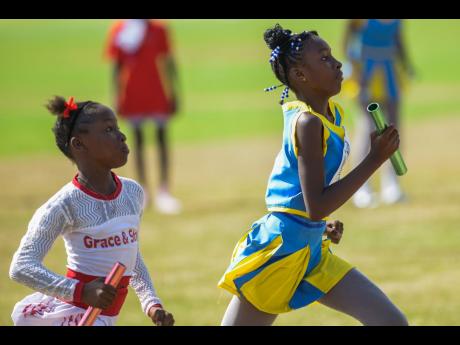 Shorn Hector
Theana Delahaye (right) of Spring Village anchors her team to victory ahead of Tatiana Williams in the girls’ 4x100m relay at the CVSS Games 2019 held at the UWI Mona Bowl on Saturday, July 6.

The sweltering heat was only matched by the fierce competition on the track and on the courts. It couldn’t dampen the spirits of competitors, where success was not only defined by wins and losses. The Council of Voluntary Social Services (CVSS) Summer Games, held at the UWI Mona Bowl on Saturday, brought together various social service and voluntary agencies for an Olympic-style event that sought to impact the lives of children in various communities.

The CVSS Summer Games, a project of the youth sector arm of the agency, was conceptualised as a means for young people to build self-esteem, provide opportunities to expose young persons to athletics, reduce inter-community tension, and encourage positive attitudes and behaviours in the youth who attend.

At Saturday’s 13th staging of the event, over 800 athletes competed from 10 agencies, including Grace & Staff Community Development Foundation, Boys and Girls Brigade, St Patrick’s Foundation, and Deaf Sports Jamaica. The various disciplines included track and field, basketball, netball and football, which was played earlier on June 22.

Tanketa Chance-Wilson, chair of the youth sector of CVSS, is proud of the growth of the yearly event, which made its debut as a sports rally.

“It has grown into a formal competition that not only brings together the agencies, but it’s open to other communities who are not necessarily members of the CVSS. But the focus is very much the same. It’s about bringing young people together to compete in an atmosphere of camaraderie and friendship,” said Chance-Wilson.

Although the games were played with a competitive spirit, Wilson was quick to note that the athletes who competed across several events were disciplined in their preparations just like the pros.

“The preparation for the games, they really take it seriously because they want to come and do well. So it gives children, young people who don’t have an opportunity to participate in a formal sporting event, an opportunity to really shine and to build their self-esteem because they are able to run on a big stage,” explained Wilson.

The sentiment was echoed by Meet Director Winston Keys.

“I am very pleased about what is happening because these are agencies in different communities, and sometimes, you have war in these communities. But at this meet, you have persons from (these) communities where you war in the communities, but they are here together and participating in a group together, and they are enjoying themselves,” said Keys.

It wasn’t just persons in at-risk communities and other areas that embraced the spirit of the games. A group of remarkable people with special needs have carved out their own unique place among the participating athletes.

Deaf Sports Jamaica, participating in their fourth CVSS Summer Games, has used the event as an avenue for improved social integration in the hearing world. For participants Rudolph Walker and Amanda Anderson, it is about changing the narrative of the deaf community.

“We want to challenge them to prove that we can do everything just like hearing people can do such as football, netball, track and field and more. Because they thought that we can’t do it,” said Anderson.

Their crowning achievement was advancing to the finals of the football tournament – and pushing the team from Grace and Staff all the way to penalties – which Grace eventually won. Walker is pleased about how far the team has come. “We won many matches with others a few years ago, and we reached the finals and got second place. It was a great match and challenge, and they are glad they made it.”

Their success is championed by Chance-Wilson, who stressed how crucial it is for persons with special needs not to be left out and for able-bodied persons to foster camaraderie, that will allow them to feel a sense of belonging.

“You don’t find many competitions where the able bodied and the disabled are not separated. So this is one of those opportunities ... where you have abled and disabled competition on the same level, on the same field, on the same track,” stated Chance-Wilson.