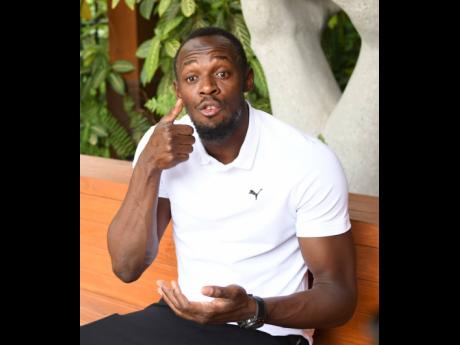 “Take responsibility for your failures!”

That’s the charge from Jamaican sprinting great Usain Bolt, who yesterday broke his silence in a stinging defence of Racers Track Club founder and head coach Glen Mills aimed at several athletes who had levelled snide remarks at the veteran coach.

Mills, who coached Bolt to eight Olympic and 11 World Championships titles, has faced criticism from a number of his former athletes – Warren Weir, Kemar Bailey-Cole and Peter Matthews –who have since changed coaches and in some cases, left the club entirely following disappointing performances.

Bolt, however, called out the athletes, who, he underlined, were developed by Mills, for what he regarded as disrespect towards the highly regarded coach, arguing that they have not been honest enough about their own roles in their failures. He also condemned the actions of a number of other athletes who he believes have brought disrepute to Mills.

Decked in a generic Puma polo and a Hublot timepiece on hand, with a bottle of water within arm’s reach, brand Bolt was on full display. However, this was not the usual Bolt sitdown. The former sprinter was stripped of his diplomatic bridle; he had things on his mind, and as he spoke, his passion and, perhaps, anger were at full gallop.

“Yeah, for a fact, [athletes should take greater responsibility]. You [can] decide to part from a coach who has made you successful, but don’t try to blame somebody for your own problems. You know you have made mistakes, take responsibility,” Bolt stated during an exclusive interview with the RJRGleaner Communications Group.

Olympic 200m bronze-medal and World Championships silver-medal winner Warren Weir, who decided to cut ties last year, has led a mini exodus from the Racers Track Club and Mills’ tutelage. Former World 100m champion Yohan Blake, who despite leaving Mills’ guidance has remained at Racers under the conditioning of Patrick Dawson, and Kemar Bailey-Cole, who is now also working with another Racers coach, Gregory Little, have also expressed their discontent in moves that Bolt believes give an unfair impression of Mills and undermines his ability and effort.

However, it is quarter-mile specialist Peter Matthews who, while responding to Bailey-Cole’s announcement on Instagram following his eighth-place finish in the 100m final at the Supreme Ventures Limited/JAAA National Senior Championships last month, launched a stinging, expletive-filled tirade against the coach that would have triggered Bolt’s admonition.

“It’s the disrespect. As far as I am concerned,Glen Mills is one of the greatest coaches ever. I tell people all the time that anything that coach Mills says is fact,” said Bolt, who came under Mills’ guidance in 2005 during a low point in his career. “You can leave a coach; I have moved on from coaches, but I didn’t disrespect anybody. We parted ways because of differences that we had, but when you are going to try and disrespect a coach – a coach that took you to a level that no one did – it hurts me personally.

“These athletes should know themselves and respect that Glen Mills took them to the highest level they have ever been – they probably won’t get back to that level, but he brought [them] there,” Bolt chastised.

Bolt, the world record holder in the 100m and 200m, also blasted the athletes for what he described as them being disingenuous, noting that they have not highlighted their own shortcomings.

“I am a type of person that always just watches and observes and says nothing. If you don’t work hard and you don’t train hard, how can you be great? When Warren Weir got to the level that he was, I remember Warren taking days off to go to Florida – him and Jason Young – just randomly in the week, taking a week off from training … . Who does that in a season?

“They’re not going to say that. No one will know these things because we sit by and don’t say anything because it’s their personal thing … . For instance, I might say Yohan Blake, when he got injured and the coach [would] say, ‘This is the direction that I want us to go,’ then Yohan Blake [would] decide that, ‘No, this not what I want to do, and I’m going to do something else.’ Although the coach said ‘X’, he decided to do ‘Y’. They’re not going to tell you all these things, but they’re comfortable to disrespect the coach and let the coach look bad. It’s very upsetting to see because I believe in my coach,” Bolt shared.

“A young athlete, [Michael] O’Hara, I can never forget when me and Mills siddung in the stands and saw him and seh, ‘This youth, he’s going to be very talented’. And he came to Racers with the same team. Nugent Walker as manager, Eddie (Everald Edwards) as masseur, coach Mills and Ricky [Simms] as his agent. And him mek a likkle money early, and one day him look pon me and said that him rich, and I had to tell him, ‘No, yuh nuh rich. Yuh just start the game. Yuh need to work hard’,” Bolt shared.

Bolt said his efforts to reach out to younger athletes over the years to offer advice have largely been rejected.

“Who is gonna listen? You have to understand these youngsters. They feel like because they got a contract or they’re doing this, they feel they know everything. They think, ‘I’ve made it, I’m here’. That is the problem that we’re having; no one wants to listen. No one has the fight in them or the hunger to be great. If you don’t want it, enuh, no matter how much I speak to them, as I said, I’ve spoken to all of these athletes, from Bailey-Cole to Blake – all of them. I’ve had conversations with them. They don’t want to hear it!”

Weir, who posted on social media that Mills had retired two years ago without telling the remaining athletes, declined comment when contacted by RJRGleaner.