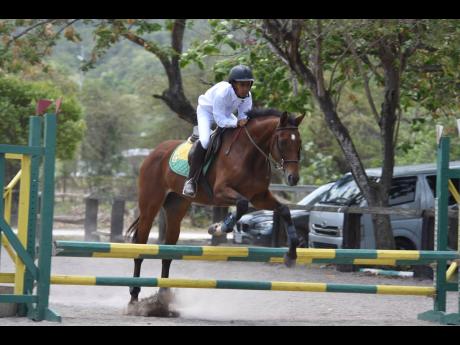 Kavarly Arnold
Joshua Purkis Williams, riding Filicka, going through the rounds at the Front Runner Jumping League at the St Ann Polo Club and Equestrian Centre in Drax Hall on Saturday, May 4, 2019.

The medium league was won by Lackife Leslie, while Trina Delisser won the low league and Isabel Craig took the mini-league title.

The standout performance came from Julian Hyde, who won the Super League and High League classes, which earned him the title ‘King of the Front Runner League’. Clementine Fitzgerald Shelby, who placed second in the mini-league, was crowned ‘Princess of the Front Runner League’ after performances from the two earlier shows that took place at the St Ann Polo Club and the Kingston Polo Club in May and June.

The showcase series was well-attended according to president of the Equestrian Federation of Jamaica, Denise Avril, who notes the changes in the format that have assisted in raising the standard of the events.

“There has been quite a bit of improvement in our shows. Whereas usually, we would have the standard classes, we’ve actually been including some fun classes towards the end of the show, and I think that it gives the competitors something to look forward to,” said Avril in an interview with The Gleaner yesterday.

As interest in the sport grows, Avril outlined avenues that the federation are exploring to reach out more into the community to spur interest, especially since it is not a sport that is easily accessible. “[Accessibility] is definitely something that we need to work on as a federation,” Avril explained. “It is difficult for the athletes. It’s not just the rider; you have to consider the horse, as well. That’s something that definitely has to be explored more.”

She hopes that continued outreach in the community will further increase interest.

“What we were thinking is to do a bit more outreach in schools. So if we have shows, if we are able to reach out to a few students who are interested, it’s a little window into the sport. They may come and see it and experience it and think, ‘Wow! Ok, I want to try this,” stated Avril.

Avril’s efforts have been boosted by the support of Front Runner, which was the title sponsor of this year’s jumping league and has already committed to sponsoring the event next year.