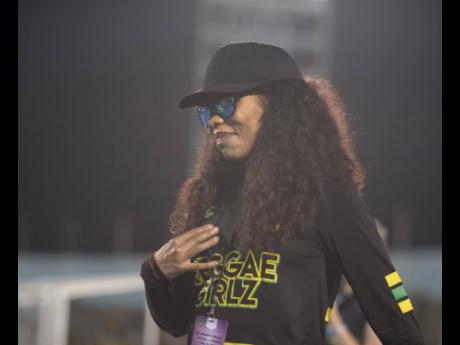 Reggae Girlz patron Cedella Marley has raised serious questions concerning the Jamaica Football Federation’s (JFF) handling of raised funds after yesterday condemning the body for refusing to allow sponsorship monies for a pre-Pan Am Games training camp for the Girlz to be paid directly to vendors.

US$42,000 (J$5.6 million) has been raised by Marley and sponsors for the training camp. Marley, who says that her charity organisation has raised approximately U$400,000 in helping the national senior women’s team qualify and participate in the recent FIFA Women’s World Cup, noted that they have no account of how that money was spent and insists on an audit before committing any more funds directly to the JFF to assist the female programme.

“Yesterday, we were aware the federation could not afford a camp, so with Alacron Foundation and other people and (us), we came up with the money. But the situation, especially from Alacron, is that we have to manage the pot.

This means that we book the airline tickets, hotel, and transportation with our credit card. We told the JFF that was the position of our major sponsor (Alacron), and they declined because they requested that the funds be sent to them, and that was not something that we were prepared to do until an audit is properly done,” Marley told the RJRGLEANER Communications Group.

She noted that this arrangement was used before under the late Captain Horace Burrell’s administration, with current president, Michael Ricketts, heading one such delegation and giving a sparkling report on how the camp was managed.

“This policy is new to me. I have done this (directly fund camps) with Captain Burrell before, booking them in hotels, paying for this and that and putting pier diems in their hands. But instead of being gracious and say ‘Thank you’ and because the Girlz need this camp, we were told by the marketing director that if (the JFF) can’t get these funds, the camp won’t happen,” Marley noted.

“It is fair for the foundation or any sponsor to say, ‘Until you can tell me where my prior money has been spent, this other money that I am willing to give, I want to pay the vendors directly.’ I don’t think it is unfair,” added Marley, daughter of reggae great Bob Marley.

“If you are going into a contract, you have to negotiate. Come with your points, and I come with mine until we reach middle ground. The JFF has been in dialogue with Ms Cedella Marley: as a matter of fact, we have accepted her offer to have the camp hosted,” said Wint.

Wint said the comments were unfortunate and is puzzled by Marley’s issue with the federation.

“It (the comment) is untrue and premature. It’s unfortunate because if you are a part of something and you want to see it done well, you don’t beat it up. You work with it, massage it, and take care of it. If you truly love a product, you don’t go out and tell everybody about it and try to discredit it,” he continued. “We have to move forward, and I am not sure that from the JFF’s side, if there is a loggerhead with Ms Marley, we have never seen anything negative from the JFF being said about her, so it can’t be from our side.”