Jamaican female fighters roses among thorns at US Open 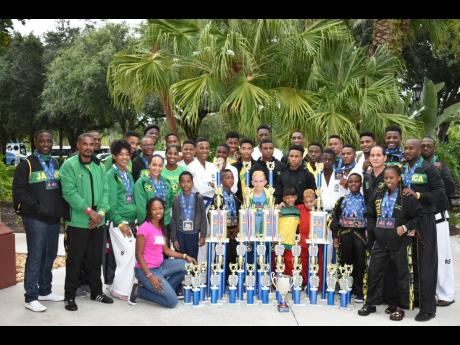 JAMAICA’s quartet at last week’s International Sports Karate Association United States Open World Championships was one of the smallest female contingents ever, but still managed to reap nine medals – four gold, four silver and a bronze, from an overall tally of 54 –19 gold, 15 silver and 20 bronze.

Karyll Bennett-Robinson of First Generation Rising Sun Karate, fighting in the 30-and-over black belt division, scored big on her first international tournament in seven years, bagging points-sparring gold on Saturday before going on to capture the grand-champion title in her category for a double gold.

Marissa Jones, who, along with Bennett-Robinson, had together joined First Generation Rising Sun Karate in 2011, won herself a bronze in black belt, Class A, 18-and-over, clash sparring, beaten for second place by Jamaican teammate, Jasmine Barrows, of Ultimate Taekwondo.

Brown reversed the order to win gold when they squared off in continuous sparring, grabbing her second medal of the tournament.

Bennett-Robinson was especially pleased with her performance, being away from international competition for seven years, resuming training a month before the US Open.

“I must express my gratitude to Ackeem Lawrence, who trained with me for the month leading up to the US Open and was my coach for all my fights,” she said.

“I was studying for seven years, getting my law degree at University of the West Indies and attending the Norman Manley Law School. I also completed a master’s in England,” she added.

“The first fight was challenging because I was competing freshly internationally for the first time in years, so I was a little nervous. However, once I won that first fight, the others were better for me,” noted Bennett, who won two bouts to claim the points-sparring gold and two more for the grand-champion title.

Bennett, who along with Jones was first invited to Jamaica’s female combined team in 2012, said she chose the US Open as her international comeback after finishing as runner-up to her teammate at May’s Ningen Karate Open.

“I have not been approached to rejoin the female combined team. That is usually done near the end of the year. There are no more local tournaments left, but a gold at the US Open carries big ranking points, so let’s see what happens,” she said.