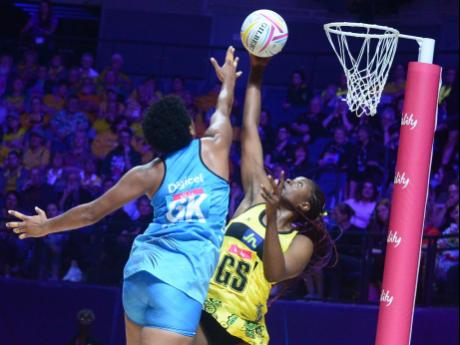 The Sunshine Girls, who are ranked second in the world, signalled their intention as a major contender for a medal, as they outclassed the 17th ranked Fiji.

Captain Jhaneile Fowler, who replaced fellow goalshooter Romelda Aiken at the start of the third quarter, led the way for the Sunshine Girls with an impressive 33 goals from 35 attempts.

Aiken, who was playing in her first match in three months, after suffering a stress fracture to her right tibia, supported Fowler with 26 goals from 36 attempts.

The Sunshine Girls turned up their defence in the third stanza, limiting Fiji to just four goals while outscoring them 27-4 to take a 67-18 lead at the end of the period.

Rebekah Robinson with 17 goals from 16 attempts and Shanice Beckford, 11 from 13, were the other scorers for the Sunshine Girls as they eased home to victory.

The Jamaicans, who are seeking to win a medal at the championships for the first time since 2007, will next face Trinidad and Tobago in their second game of the tournament tomorrow.