Tanya Lee | Nobody wins when the family feuds 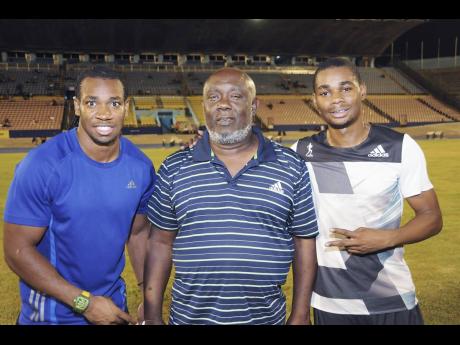 I listened this week as the world’s greatest athlete, Usain Bolt, came to the defence of his esteemed coach, Glen Mills, head coach of the Racers Track Club, who recently came under fire from a few of his former ­athletes, with one taking to social media to vent his frustrations over growing issues he had with the club.

For anyone paying attention, there has been an exodus of athletes from the Racers Track Club since the big man’s retirement.

At my last count at the national trials, less than five athletes, I believe, competed under the Racers banner. It begs the question, what has happened to the myriad ­athletes who were once representing the esteemed club, famously responsible for two of the fastest men in the world in Usain Bolt and Yohan Blake? From afar, it signals that something is amiss.

From my knowledge, the Racers Track Club downsized upon Bolt’s retirement. Whether it is as a result of his departure, I am unsure. The club became a different place, in some respects, while many athletes waited in the wings for their moment in the sun.

I am told by multiple sources that there were growing levels of disquiet and uncertainty among those who have detailed, in recent times, not having enough trainers or essential personnel at their disposal. Some felt they were left to their own devices. Some complained of not having the services of specialised staff and not having written programmes designed for their various coaches. Compounding that issue for the athletes were that, apparently, they was not getting enough answers to their questions, which naturally put a wedge in what was otherwise a great relationship with their head coach.

The individual grouses of the athletes I have spoken with are largely similar, albeit not ventilated in the right way or in the right forum as social media is not the space to resolve ‘labour disputes’. I suppose for the new generation, social media is akin to holding up a placard outside the office and hoping management will take notice and the issues will be resolved. In this case, there is no labour union, and all parties are not speaking directly with each other.

Uncertainty around one’s future lends itself to an unhealthy mental space, and a healthy mental space is an important ingredient for preparation and progress in athletics. Athletes require structure, focus and persistent supervision. The younger and less experienced the athlete, the more this may be required.

It is my view that the MVP model is probably best, where the club handles the athlete’s complete preparation and thus they are not left to their own devices, some of which may not be advisable, as the legend expressed.

There are three sides to every story, but depending on what lens you wear, your empathy may reside on one side versus the other. Often, all three sides are valid – just from different perspectives.

There is the perspective of the head coach who has a high standard of excellence, which was solidified long before the phenom, Usain Bolt. The coach may be faced with the realities of maintaining a business after the departure of his greatest athlete and dealing with the myriad obligations and obstacles that are presented by managing various personalities and staff. The highly accomplished Mills started coaching at 18, as Bolt pointed out. He will be 70 years old in August. And 52 years is quite a long time.

The athletes’ perspective is that they placed their high hopes of continuing the legacy of Jamaica’s greatness into the hands of the club and they are desirous of continuing to build on this success. In many instances, they are hard workers exposed to the rigours of intense training since high school and from their past successes. They now crave a complete framework to facilitate this. But the athlete doesn’t often articulate this well and is often misunderstood. They have a small earning window, a very competitive global field, and the immense weight of Jamaica’s achievements. Any derailment of this can be quite demotivating.

For the big man himself, he has created a rich legacy, and he wants to see the continuation of Jamaica’s dominance. He feels that the athletes are partly to blame for some of the issues that now exist, and he expresses being embarrassed. Truthfully, his life and trajectory, based on his superhuman talents, have placed him in a bubble, if you will, wrapped in his own successes and somewhat out of touch with the current day-to-day realities of some of his former colleagues.

But nobody wins when the family feuds, and empathy is important in all situations. I am confident this can all be resolved, far away from the salacious headlines.

Tanya Lee is a regional sports ­mar­keting and communications expert.

EDITOR’S NOTE: It should be established that Tanya Lee is the communication manager for a number of the athletes involved in the now well-documented issues surrounding the Racers Track Club.