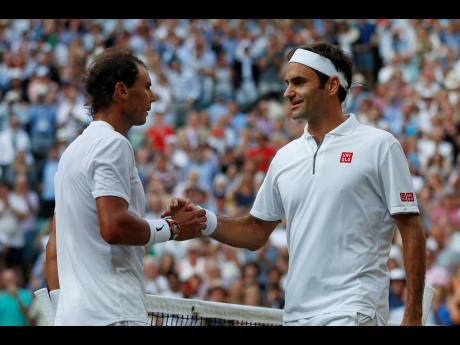 Roger Federer waited 11 years to get another shot at Rafael Nadal on Centre Court. This one was a semi-final, not a final. It was settled in four sets, not five.

Felt like just as much of a classic contest, though, one that anyone present is not likely to forget.

That, of course, includes Federer, who managed to pull away and beat long-time rival Nadal 7-6 (3), 1-6, 6-3, 6-4 yesterday by finally coming through on his fifth match point.

“I’m exhausted. It was tough at the end,” Federer said. “Rafa played some unbelievable shots to stay in the match. I thought the match was played at a very high level.”

Federer closed in on a ninth championship at the All England Club and 21st Grand Slam trophy in all. In tomorrow’s final, Federer will go up against Novak Djokovic, who is the defending champion and seeded No. 1.

As entertaining Djokovic vs Bautista Agut was – including a 45-stroke point won by Djokovic – it was merely a tasty appetiser ahead of the day’s delectable main course.

Not only was this the 40th instalment of Federer vs Nadal, but it also was their first meeting at Wimbledon since the 2008 final. Nadal won that one 9-7 in a fifth set that ended after 9 p.m., as any trace of daylight disappeared, in what some consider the greatest tennis match in the sport’s lengthy annals.