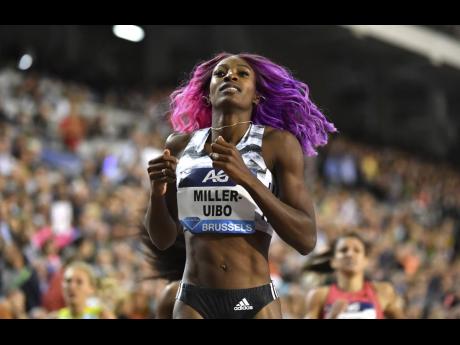 Shaunae Miller-Uibo, the versatile Bahamian sprinter, wants to try the 200-400m double next year at the Tokyo Olympics. Speaking in Monaco ahead of her 200m victory in yesterday’s Diamond League meeting, Miller-Uibo expressed the hope that the schedule would be changed in time to make an attempt at the double feasible.

A tight schedule hampered the 2016 Olympic 400m champion at the 2017 IAAF World Championships, and the 200-400 schedule is even tougher for this year’s Worlds.

“This year, it’s obviously not put together, so we can’t double this year, but next year, we’re hoping for it. Hopefully, they can change up the schedule a bit for us,” she said in a pre-meet press conference.

In 2017, the overlap between the two events forced her to run the 200m heat on the rest day between the 400m semi-final and final. She faltered in the 400m, won by American Phyllis Francis, and missed the podium before taking a bronze in the 200m final.

“We’re asking, but if they can’t,” she said before pausing, “that’s obviously something we’d like to do.”

With an oblique reference to the 1996 Olympics when American Michael Johnson and French heroine Marie-José Pérec both did gold-medal 200-400m doubles, she commented, “It’s something that’s quite rare, and I think it would be fun to put it on for the crowd as well.”

In 1996, organisers acceded to a request by Johnson to schedule a rest day between the 400m, which came first, and the 200m. The American then became the first man to do the double, which he concluded with a world record of 19.32 seconds in the shorter event. Pérec won both women’s events to match the 1984 feat by Valerie Brisco-Hooks of the United States.

Commonwealth champion last year, the 25-year-old Bahamian has cemented her position as an elite 200-metres sprinter this week. In Hungary on Tuesday, she set a season’s best 22.18 seconds to defeat Ivorian Marie-Josée Talou, the World runner-up. In Monaco, she went faster – 22.09 seconds – to turn back Olympic champion Elaine Thompson of Jamaica. After that emphatic win, she reiterated, “If they can change the timetable for the Olympics, I’d be more than happy to double.”