VAR has its place – Brown 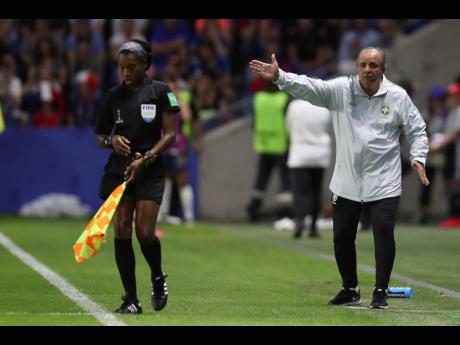 But though the video replay system overturned one of her decisions, she believes that VAR has been a big help to match officials and is better for a ‘fair’ game.

However, VAR comes with a lot of new officiating methods, and Brown says they have to adjust to a new mindset to officiate at the highest level, using VAR.

“It’s a different system and you have to know how to work with VAR because if you miss a call, VAR intervenes and lets you know you miss an offside or anything else,” Brown said upon her arrival from the tournament at the Norman Manley International Airport on Monday night.

In the round-of-16 game between hosts France and Brazil, Brown called back a Brazil goal for offside. However, after review, the goal was given. But to Brown’s credit, she followed the new refereeing guidelines by allowing the attacking phase of play, or APP, to end before she raised her flag. Had she made the call before the play had ended, it could have resulted in Brazil not getting a goal. But although she got the decision wrong, she was glad VAR intervened and made the right call.

“VAR is a good thing. If there is a mistake by the assistant or referee, VAR helps us just to get the game fair,” she said. “People might not like it, but it really helps. Most referees don’t see some contacts, but [with VAR], you have cameras all around, so if a referee misses something, VAR can send down some image and the referee can review and make her decision. But once VAR calls a referee, there is something. VAR cannot have the final say. The referee has the final say. But once VAR calls you, it means something is wrong and they want you to get the other view before making your decision.”