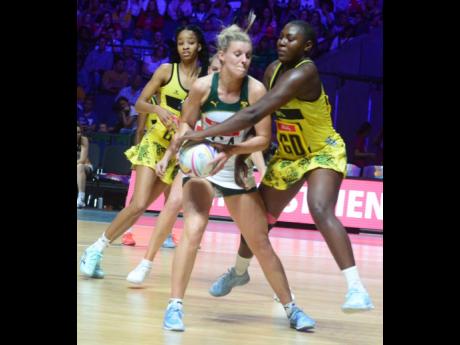 Jamaica’s Sunshine Girls suffered a shocking 55-52 defeat to South Africa in their final match in Group C of the Vitality Netball World Cup at the M&S Bank Arena here today.

The Sunshine Girls started the match very poorly, as their midcourt players, led by Khadijah Williams, centre Adean Thomas, and wing defence, Jodiann Ward, combined to turnover the ball nine times, as they trailed the South Africans 16-9 at the end of the first period.

The South Africans continued to dictate the pace of the match in the second quarter, as they outscored the Jamaicans 16-12 for a 32-21 lead at half time.

However, the Sunshine Girls' head coach Marvette Anderson made two changes to her starting line-up at the start of the third period, when she replaced Adean Thomas at centre with Nicole Dixon, and she brought on Stacian Facey for Ward.

The move paid off for the Jamaicans as they shut down the South African free scoring attacking unit, by outscoring them 17-10.

Jamaica played brilliantly in the final quarter as they stepped up their defence and one point rallied to tie the game at 44-44.

The defeat marks the first time that Jamaica lost a group stage match in the competition.

However, a number of unforced turnovers by the Sunshine Girls in crucial stages of the quarter and solid defending from the South Africans, resulted in the latter holding their nerves to secure the win.