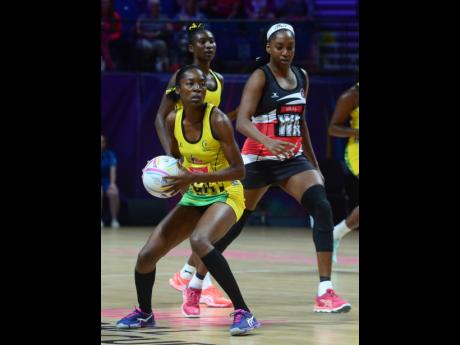 Jamaica’s head coach, Marvette Anderson, said that the Sunshine Girls must step up their game today when they face South Africa in their third match of the Vitality Netball World Cup at the M&S Bank Arena here. Match time is 11:00 a.m. (Jamaica time).

The Sunshine Girls, who are ranked second in the world, will face a very strong South African team, which is being conditioned by the experienced former Australian World Cup-winning coach Norma Plummer.

The Jamaicans got off to a slow start in yesterday’s 68-43 victory over Trinidad and Tobago (T&T) as they led by a slim 17-15 margin after the first quarter and 42-23 at half-time before pulling away to win the match quite comfortably in the second half.

MUST Come out firing

Anderson told The Gleaner that the Sunshine Girls must come out firing on all cylinders against the South Africans if they are to get their desired result.

“It was not the start that we would have liked, but everybody is entitled to a bad game, and this was our bad game,” said Anderson. “We were able to fix it going into the second quarter, and we just have to hit the ground running come our next game against South Africa because there will not be any room for that slow start or any errors.”

The Sunshine Girls will once again be led by captain Jhaniele Fowler, who netted an impressive 38 goals from 40 attempts against Trinidad and Tobago yesterday. Along with goal attack Shanice Beckford, who was also impressive against T&T with 12 goals from 14 tries.

The midcourt will be led by Khadijah Williams, Adean Thomas, and Jodiann Ward while Shamera Sterling and Stacian Facey will marshall the Sunshine Girls’ defensive unit.

On the other hand, the South Africans, who are ranked fifth in the world, have been tipped by many here as the dark horses of the tournament.

Plummer, who led Australia to the World Championships in 2011, said they are looking forward to the encounter against the Jamaicans.

“It is going to be tough, and we know that because they are a quality team, and so we are very aware that we will have our hands full against Jamaica,” said Plummer. “We just have to step up to the plate and give it our best shot because we are going to be up for the challenge, and all we have to do is to get out there and give it a crack.”

“I don’t think the pressure is on us because it is more on the Jamaicans because they are now ranked number two in the world and we are fifth in the rankings,” Plummer said.