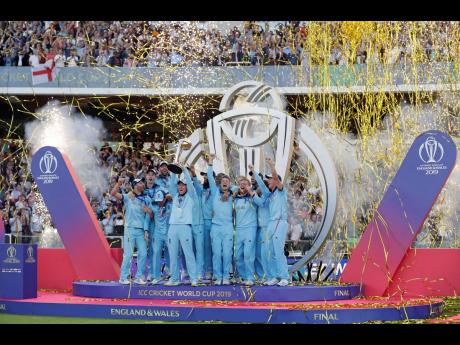 Jos Buttler threw his gloves into the sky and wheeled away in celebration, screaming with pure joy. Jofra Archer slid on his chest across the Lord’s turf and beat the ground. Joe Root punched the air as he was lifted up by a teammate.

After more than nine stomach-churning hours, the first Super Over in ICC World Cup history, and possibly the most extraordinary over ever played, England ended their agonizing 44-year wait to be world champion of the sport they invented.

“The most ridiculous game of cricket to have ever been played,” was how Buttler, England’s wicketkeeper, summed up a crazy World Cup final against New Zealand yesterday that had pretty much everything.

A sporting contest for the ages finished with England winning, courtesy of a tiebreaker that few inside the home of cricket had likely ever heard of or even understood: Boundaries countback.

That was because England and New Zealand – both bidding for a first world title – couldn’t be separated after the regulation 50 overs a side (they both scored 241) and then a nerve-shredding Super Over (they both scored 15) played in early-evening sunshine in northwest London.

In the end, England prevailed because they hit a total of 26 boundaries – fours and sixes scored across both the 50 overs and the Super Over – compared to New Zealand’s 17.

It was a slow-burner of a final that reached an astonishing crescendo at Lord’s in a final hour few will ever forget.

Needing 22 to win off the final nine balls, Stokes smashed the ball high towards long on off Jimmy Neesham. Trent Boult took the catch but fell backward and trod on to the boundary cushion before he had time to release the ball to teammate Martin Guptill nearby. Guptill signalled a six should be awarded and the umpires obliged.

The target to win was 15 heading into the last over, bowled by Boult. After two dot balls, Stokes slogged a six over midwicket. Nine runs were needed off three balls.

Stokes smashed the next ball into the leg side and set off to run two. As he sprinted back to the striker’s end, he dived and stretched his bat out in a desperate bid to reach the crease – only for the ball, thrown in by Guptill, to strike Stokes’ bat and deflect all the way to the boundary edge in front of the famous pavilion at Lord’s.

Confusion reigned, but England had just scored six runs – two ran, along with a four. Three required off two balls.

“That was a bit of a shame, wasn’t it?” Williamson said.

Stokes was still on strike and he pushed the ball down the ground, setting off again for a two to ensure he kept the strike. Adil Rashid was running to the non-striker’s end and was easily run out, but Stokes had the strike and England had an extra run.

In an almost exact replica of that next-to-last delivery, Stokes toed a yorker out to long on and again attempted to run two. This time it was Mark Wood ran out at the non-striker’s end, but again England collected the single to take the match to the rare Super Over.

Fans had their hands around their heads in amazement. A rule explainer came up on the big screen.

The Black Caps had to score more than England because of their inferior boundary count. And thanks mainly to a six by Jimmy Neesham, they needed two off the final ball.

Guptill, who seemed to be involved in all of the match’s defining moments, hit it into the leg side. He scrambled back for a second run that would have earned the Black Caps their first world title, but Buttler showed extraordinary composure to collect Jason Roy’s throw from deep midwicket and remove the bails with his left hand.

England’s players erupted in celebration – but still had an agonizing wait before the decision was confirmed by the TV umpire.

“OUT,” read the message on the big screen after Guptill was shown to be three yards (metre) out of the crease.

“I can’t believe what has happened,” England all-rounder Chris Woakes said. “I can’t get my head around it.”

There were heroes everywhere in blue shirts, not least Buttler, whose clean catch and grab ultimately won England one of the most dramatic finishes of a match in any sport.

And what about Stokes, born in Christchurch, New Zealand, and playing almost a year after he was cleared by a court of affray following a street brawl on a night out in September 2017.

That deflection for four off his bat will be replayed and replayed.

“I said to Kane Williamson,” he said, “that I’ll be apologising for that for the rest of my life.”

Humiliated in a group-stage exit at the 2015 World Cup, England ripped up its One Day International game and started all over again with a new coach, a new director of cricket and a new mindset.

Four years later, they are on top of the world in the most unforgettable way.