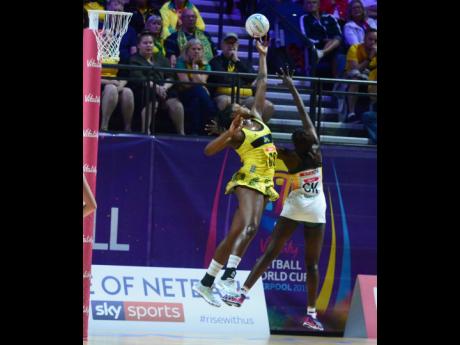 Following their shocking 55-53 defeat to South Africa yesterday, the Sunshine Girls will be in for another bruising encounter today when they face hosts England in their second-round match in Group G of the Vitality Netball World Cup at the M&S Bank Arena here.

Group G, which is comprises six teams, also includes Scotland, South Africa, Uganda, and Trinidad and Tobago, with the top two teams advancing to the semi-finals.

However, interestingly, the teams that were drawn in the same group in the first round and have already played each other, will not face each other in this phase of the competition despite being in the same group, meaning that each team will play only three matches.

The teams will instead carry over their goal average from the first round of the competition to this round of the ­tournament. Jamaica were totally ­outplayed in every department by the South Africans in the first two quarters of yesterday’s match.

The Sunshine Girls, who are ranked second in the world, three places above the South Africans, committed 16 ­turnovers in the first two quarters on their way to their first defeat against South Africa since 2013.

Jamaica’s head coach, Marvette Anderson, said that they were deeply saddened by the loss but she is backing her team to return to winning ways against England today.

“It is going to be tough, but we have been down this road before, and it is about how well you come back. I think that we are ready for that comeback,” said Anderson.

“I think that when you play, you play to win, so it means that we just have to dig deeper in our match against England because it is a must-win for us,” she said.

The Sunshine Girls have committed 81 turnovers in three matches in the ­competition so far, including 21 against the South Africans, and Anderson said the Jamaicans must do a better job of taking care of the ball against third-ranked England today.

“We have been having a problem with turnovers, and I think we had too many early in this game. So we have to ensure that we protect the ball whenever we are in possession of it,” Anderson said.

She said that yesterday’s defeat will not affect the team mentally.

“It will definitely not affect the morale of the team because it was a competitive game, and we expected the fight, and we came out on the losing end, but that has not taken the sting out of our quest because we are going to be ready for our next game,” Anderson said.

The match tips off at 9 a.m. Jamaica time.