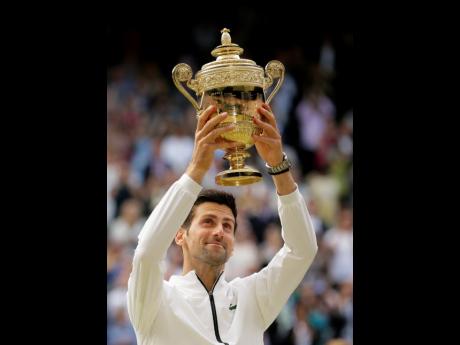 For nearly five tight, tense, and terrific hours, Novak Djokovic and Roger Federer traded the lead, playing on and on and on until an unprecedented fifth-set tiebreaker was required to settle their memorable Wimbledon final.

“Unfortunately, in these kinds of matches, one of the players has to lose,” Djokovic said. “It’s quite unreal.”

After facing two match points at 8-7 in the last set, he wound up claiming his fifth Wimbledon title and second in a row.

This triumph also earned Djokovic his 16th Grand Slam trophy overall, moving him closer to the only men ahead of him in tennis history: Federer owns 20, Rafael Nadal has 18.

“I just feel like it’s such an incredible opportunity missed,” said Federer, who actually accumulated 14 more total points, 218-204. “I can’t believe it.”

He has ruled grass courts since the early 2000s; he has won Wimbledon eight times dating back to 2003, and this was his record 12th appearance in the title match. But Djokovic is now 3-0 against Federer in finals at the place and 4-0 against him in five-setters anywhere.

This one was unlike any other, though.

That’s because, while it was reminiscent of Federer’s 16-14 fifth-set victory over Andy Roddick in the 2009 Wimbledon final, that score is no longer possible: The All England Club altered its rule this year to do away with never-ending matches and institute a tiebreaker at 12-all in a deciding set.

At one point during the final set on Sunday, Djokovic asked chair umpire Damian Steiner whether the change called for the tiebreaker at 10-10. Later, when Djokovic held for an 11-10 lead, it was Steiner who got confused, beginning to call out the score as 11-9, before catching himself.

“I respect whatever the rule is,” Federer said when asked what he thinks of the altered set-up. “So really, it is what it is, you know?”

Federer and Djokovic pushed each other to the limit in what became as much a test of focus and stamina as it was about skill. It is the longest final in the history of a tournament that dates to the 1870s, eclipsing by nine minutes Nadal’s five-set win over Federer in 2008.

Like that one, this is destined to be discussed for years.