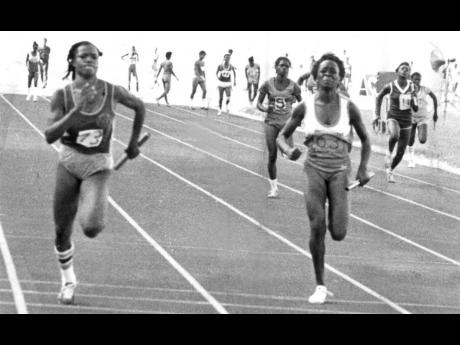 Melroy Sterling
In this file photo from Friday, March 14, 1986, Twilet Malcolm-Alexander, then of St Jago High School, competes in the Class Two girls’ 4x100m relay at the ISSA Girls’ Championships at the National Stadium.

When pancreatic cancer took the life of Jamaican Olympian Twilet Malcolm-Alexander last week, it was the final chapter in a journey filled with high achievement. Malcolm-Alexander, 50, succumbed after a protracted period of illness in the United States.

She was a member of Jamaica’s 4x100m relay pool at the Barcelona Olympic Games 27 years ago. Emerging first at St Catherine High School and then at St Jago High, Malcolm-Alexander first made her mark on the US college circuit with a long-jump victory at the 1989 Junior College Championships and runner-up finishes in the 100m and 200m for San Jacinto Community College. Her performances grabbed the attention of Southwestern Louisiana assistant coach Tommy Badon and prompted a move to that institution.

“I liked her competitive attitude,” he said earlier this year. “It meant so much to her to be the best she could be. Our women’s programme had just gotten started in 1985, and we weren’t very good yet, but with her in the front end, we built it into a conference power.”

Her work ethic and attitude earned her the respect of her teammates.

“Sometimes we thought she was coach Badon’s assistant because she was always telling us what to do,” former sprint teammate Keisha Rideau said recently.

In 1991, she won the 100m, 200m, and long jump before adding legs to the squad’s relay teams at its regional conference championships.

In addition, she became the first lady from Badon’s youth programme to reach an NCAA Championship final when she placed fifth in the 100m.