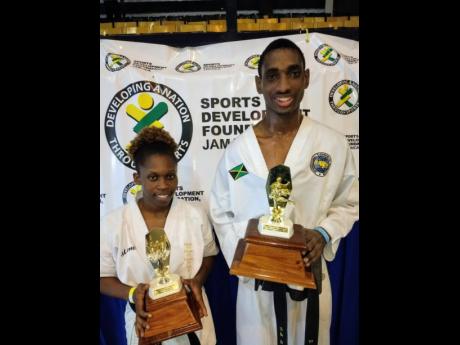 “The Seido annual karate tournament is known for its strong emphasis on discipline, which keeps our sponsors, the Sports Development Foundation and McKay Security, returning every year for a respected fixture on the martial arts calendar,” Robinson said.

The grand-champion title went down to a three-way battle among many-time champion Paul Williams of New York Seido, the over-forty winner; and Francis and Lindsay, lightweight and heavyweight winners, respectively, both of Kingston Taekwondo.

Defending grand champion Ackeem Lawrence lost in lightweight semis after opting to fight through the rounds instead of utilising a bye to defend his title.

Watched by competitors from all the major martial arts schools, some as young as age three, after displaying their individual skills at what turned out to be the biggest tournament of the year, Robinson praised Francis and Lindsay.

“It was a wonderful display of clean fighting between two fighters with different techniques. I was especially pleased with the performance of Francis, who had been knocking at the door for many years and was now successful. It was a joy to watch,” Robinson remarked.

“It was an epic battle for the championship. Both fighters traded blows at lightning speed. It was perhaps the most exciting grand-champion finals in many years, which Francis won after two exciting rounds.”

Jamaica College defeated St George’s in the final of the McKay Security Jamaica Taekwondo High School League division but ended the season as runners-up to the North Street lads, who edged them 3-2 in tournaments won.