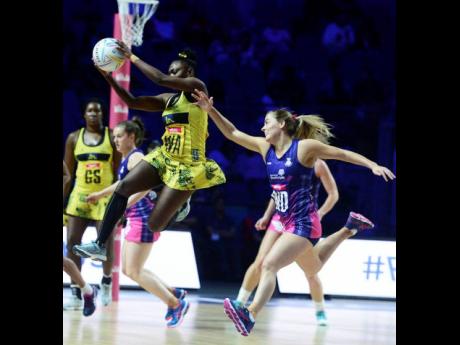 Captain Jhaniele Fowler has heaped the blame on the Sunshine Girls coaching staff following the team’s failure to secure a spot in the semi-finals of the ongoing Vitality Netball World Cup here.

The Sunshine Girls slim hopes of advancing to the last four of the competition officially ended yesterday after England defeated Caribbean side Trinidad and Tobago 72-46 and South Africa outclassed Uganda 67-40.

Fowler told The Gleaner after the Sunshine Girls’ 67-36 win over Scotland yesterday that a lot more needs to be done to improve the structure of the Jamaican team going forward.

“Most definitely, the coaching does have something to do with the performance of the team,” said Fowler. “There are a lot of things that we need to do as an international team to step it up in some areas in order to compete with the likes of England, Australia and South Africa.

“You can have some of the most amazing players on the team, but if there is no structure in place, then it is not going to be an easy walk in the park,” Fowler added.

Fowler, who currently plies her trade in the Australian Suncorp Super League with the West Coast Fever, underlines that the Sunshine Girls were disappointed with their performance at the tournament and she is hoping that Netball Jamaica will do whatever they can to change the team’s fortunes.

‘Do what is best for the team’

“To be honest, what is best for the team, I hope that is the decision that is going to be made. If I am removed as the captain of the team and I am still with the Sunshine Girls, I will still play a supporting role as a player,” she said.

Fowler was the leading scorer for the Sunshine Girls in their win over Scotland with 45 goals from 48 attempts. The Jamaicans trailed 14-13 at end of the first quarter but they rallied to take a 32-21 lead at half-time.The Sunshine Girls’ victory was never in doubt as they outplayed the seventh-ranked Scotland in final two quarters to secure the victory.

Romelda Aiken with 13 goals from 16 attempts and Rebekah Robinson with nine goals from 12 tries were the other scorers for the Sunshine Girls, who led 50-26 at the end of the third stanza.

Fowler outlines that the Sunshine Girls are very happy for the victory because they want to ensure that they end the tournament on a high.

“It is not the position that we want to be in because we don’t want to be playing for fifth or sixth,” she said.

“We wanted to be upon the podium, but it is not what is going to be the case at the moment, but we still have to finish strong and make our country proud,” she said.